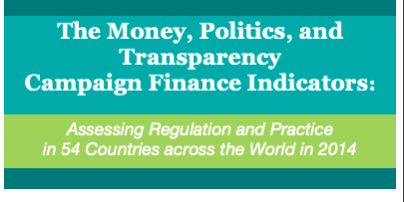 The role of money in politics is of increasing relevance all across the world. Campaigns are an integral part of the political arena. At the global level, elections occur more frequently today than ever before. More elections mean that more money is needed for campaigning. Consequently, money’s role in the electoral space is increasingly prominent. Recent elections in countries as diverse as the United States, Malawi, Bangladesh, and Venezuela have been affected by inflows of money of uncertain provenance. Who is funding campaigns? Is campaign financial information available to the public? Are state resources illegally deployed for electoral benefit? What role do third party actors play? Are oversight bodies legally and practically capable of monitoring political finance and enforcing relevant legislation?

The Money, Politics, and Transparency Campaign Finance Indicators (MPT) provide locally sourced, evidence-based answers to these questions. Researched between July and December 2014, MPT deployed a team of local experts to systematically investigate and review political finance issues in 54 countries across the world. MPT examines the existence and enforcement of campaign finance legislation at the country level.

There are extensive data repositories already in existence that document the laws and legal mechanisms regulating country-level political finance. Most notable among these is the International IDEA Political Finance Database, an invaluable resource for comparing the different regulations in place in different countries. Existing data, however, focuses exclusively on de jure legal frameworks, and does not assess the extent to which or how, in practice, those frameworks are de facto regulated. The MPT research fills this gap, providing exceptionally granular, evidence-based information on both relevant legal instruments and the efficacy of enforcement in 54 countries across the world.

The MPT dataset is composed of 54 country scorecards, each of which contains 50 indicator questions split into five broad categories. Each category addresses issues integral to the effective, transparent regulation of political finance. Global Integrity worked closely with a carefully selected group of international campaign finance experts to develop these categories and the indicators of which they are composed. The categories are:

Each country scorecard assesses each of these issue areas, providing detailed data that enables reformers and policymakers to better understand the relative strengths and weaknesses of systems within and across countries. Crucially, the explanatory comments written for each indicator provide a wealth of information about the context-specific aspects of regulation in given countries. As such, the MPT dataset is a tremendously useful tool, capable of informing policy debates regarding the role of money in politics at country, regional, and global levels.

Note that Global Integrity has not compiled an index in which countries are ranked relative to one another in terms of their performance on the MPT scorecard. An index has been avoided for two primary reasons:

First, the complexities of political finance issues are such that they resist easy categorization. In papering over the highly contextual realities inherent in each country covered, an index would be somewhat reductive, and would likely lead to casual country comparisons that fail to capture the ways in which different features of political finance vary in relevance across countries and regions;

Second, an index would likely induce readers to emphasize quantitative scores rather than digging into the explanatory comments and sources that make up the primary components of each indicator. Quantitative scores are certainly useful for basic categorization, and may be of particular utility when making broad comparisons. However, by unpacking the particulars of situations within countries, and using evidence to thoroughly explain both country context and chosen scores, the explanatory comments within the dataset are a veritable goldmine of information for reformers and policy makers seeking to understand different approaches and realities at the country level.