Learning to Make All Voices Count: Establishing Platforms for Democratic Engagement in Kenya 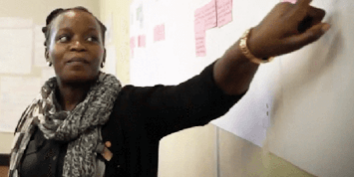 Kenya joined the OGP in December 2011, and adopted the first National Action Plan (NAP) three years later. But, contrary to the aspirations that underlay the initiative, this was all undertaken without much in the way of citizen participation. To operationalise the OGP in its true sense – to empower citizens to demand government accountability – would mean tackling major problems facing the country, such as ‘rampant corruption in government institutions, poor leadership and integrity, tribalism and lack of political will’, amongst others.

The Constitution and Reform Education Consortium (CRECO) is a consortium of 23 Kenyan CSOs which seeks to create national awareness of the OGP and NAP, and improve public participation in these initiatives at county level. In particular, they are focusing their efforts on two key commitments – transparency in the legislative process, and improving access to government budget information. Their efforts to create wider and more inclusive structures for public participation are targeted at two counties, Makueni, where an OGP subnational plan is already being implemented, and Elgeyo Marakwet, one of the OGP pioneers amongst the country’s counties.

To help CRECO strengthen citizen engagement in OGP at the subnational level, Global Integrity embarked, with CRECO, on a voyage of learning into largely uncharted waters. We helped them to:

CRECO developed a bold strategy that involved establishing Country Oversight Committees (COCs) as a platform for engagement, conducting public hearings, mobilizing local CSOs and advocating for the implementation of the OGP and the second NAP. Indicators of success were identified as strong state/non-state partnerships, increased citizen awareness, the capacity to hold office-bearers to account, and effective monitoring of these activities.

Results of this work were impressive, given the contextual constraints. Findings that have emerged from the monitoring process have been used to inform interventions and track progress at both the national and subnational levels of the second NAP, and capacity building exercises held with officials have resulted in increased interaction and collaboration between them and the citizenry.

According to Zipporah A. Abaki and Joshua K. Changwony of CRECO, ‘Regular conversations and check-ins with Global Integrity helped us dig deeper, collect evidence and reflect on our work as we implemented the project, which gave us a better sense of how things were going and how we might adapt. Inputs from the global learning community, especially on … adjusting to contextual challenges provided a useful means to identify opportunities and gaps in our project logic and implementation.’

With Global Integrity’s support, they observed, CRECO had been able to contribute to the emergence of a ‘conducive environment where national and county governments ensure accountability, transparency and service delivery through citizen participation’.

Compared to what CRECO initially dreamed of, this outcome may seem modest. However, by its own admission, CRECO’s original plans revealed themselves to be over-ambitious, once the contextual constraints were taken into consideration. Their idea was to establish an online data collection platform that would enable cross-county information sharing and support, as well as a feedback mechanism for citizen use. The plan turned out to be too costly for the project to support, but, perhaps more importantly, they came to understand just how limited Internet access is in the counties they were targeting.

And this is where Global Integrity’s support was crucial. Rather than being held hostage to technological limitations, they developed a monitoring tool that their local Community Oversight Committees could use to collect information about the implementation of Commitments 3 and 7 of the OGP — legislative transparency and improved access to budget information.

The use of this tool enabled CRECO, through its COC’s, to collect and analyse data on the progress made by their two targeted county governments on the implementation of the OGP, and to identify gaps in implementation.

CRECO’s commitment to adaptive learning ‘has strengthened the participation and engagement on the second NASP among CSOs and citizens in the two counties’. And, as a result of its interactions with actors at all levels of government and civil society, it has been instrumental in organizing a national platform for CSOs and state actors to come together, reflect jointly on the progress of the second NAP, and plot the course for the third NAP.