Leaving But Not Disappearing 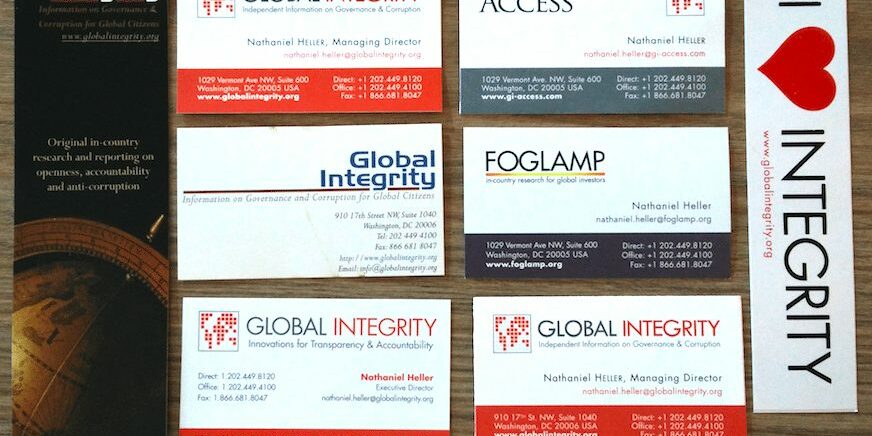 As I mentioned recently on my personal blog, I’ll be wrapping up at Global Integrity on December 31st, making my professional transition to the Results for Development Institute on January 1 2015. In practice, Friday December 19th will be my last day in the office, as Global Integrity closes after that until 2015. This means you’re reading what is likely my last blog post for Global Integrity – perish the thought!

To whit, I wanted to reflect for just a moment on the way out the door. There’s so much that I’m proud of looking back over the past decade. Here’s a Top Seven List* of my personal highlights:

Since we made the announcement of my transition public back in September, I’ve received certain questions that recurred with surprisingly regularity. Before I completely unplug, I thought I’d address a few of the more interesting ones.

This was the number one most repeated question I received in the past four months, almost verbatim each time it was asked. The short answer: no. Why? Because I am blessed with two real babies at home. And that reality is a powerful source of strength and perspective.

Most if not all [social] entrepreneurs struggle mightily with work-life balance. The need to work nearly 24/7, especially in the early years when survival is anything but assured, becomes a brutal reality. Global Integrity began on my dining room table for the first three months, where I developed the unhealthy habits of working too late into the evening. Having children has actually helped to fight back against those bad habits, and it’s given me the ability to healthily delink myself as an individual from Global Integrity and my professional work. That doesn’t mean I don’t care passionately about Global Integrity, but it’s not the only thing that defines me as a person.

Won’t you miss running your own show?

Without a doubt, there is something deeply satisfying about entrepreneurial ventures (whether commercial or social) that cannot be replicated anywhere else. I’ve relished that part of building and growing Global Integrity. It’s in the risk of trying something new, without any guarantee of success, that you find some of the purest professional fulfillment.

But there’s also a darker side to the entrepreneurial myth that I won’t miss quite as much. The constant anxiety about revenue. The waking up at night, the difficulty in falling asleep at night, the playing out of endless worst-case scenarios over and over in your head. I’ve seen the Global Integrity bank account with more than a million dollars of cash in it, and I’ve seen it with just $2,000 and a looming payroll to make. Those are deeply humbling, gray hair-inducing experiences. Every entrepreneur has gone through them, but it doesn’t make them any more pleasant.

Are you remaining on the Board of Directors?

No, just as we originally announced. This is not because I am tired of Global Integrity and don’t care about its future success. Quite to the contrary: I am convinced that the best way for Global Integrity to thrive and to continue to grow is without my direct involvement in any formal governance role. I’ll remain a sounding board and source of (likely poor) advice for the new Executive Director and board if/when they ask for it in the future. But I don’t want to get in the way of future decisions by making people feel like they need to check with me first if they want to alter things I originally set in motion.

Where to find me

As this post’s title suggests, I’m transitioning within but not leaving the transparency and accountability community. In fact, I’ll remain engaged more deeply than ever through R4D’s social accountability and governance work as well as through my seat on the Open Government Partnership steering committee beginning in January 2015. You can’t get rid of me so easily!

In closing, a huge heartfelt thanks to my colleagues (both on staff and the board) for putting up with me and for entertaining more bad ideas than good ones since 2005. I’ve done my best to ensure that Global Integrity is much more than any one personality, and I hope that everyone realizes what a collective effort this all has been. I’ve stood on the shoulders of the giants who were sitting next to me in the office day in and day out.

To butcher a phrase from the great Garrison Keillor: Be well, do good work, keep in touch…and I’ll see you on the Twitters.

* I couldn’t come up with a clever eighth, ninth, or tenth entry. Oh well.