Outside/In: The Winds of Change in Political Windows 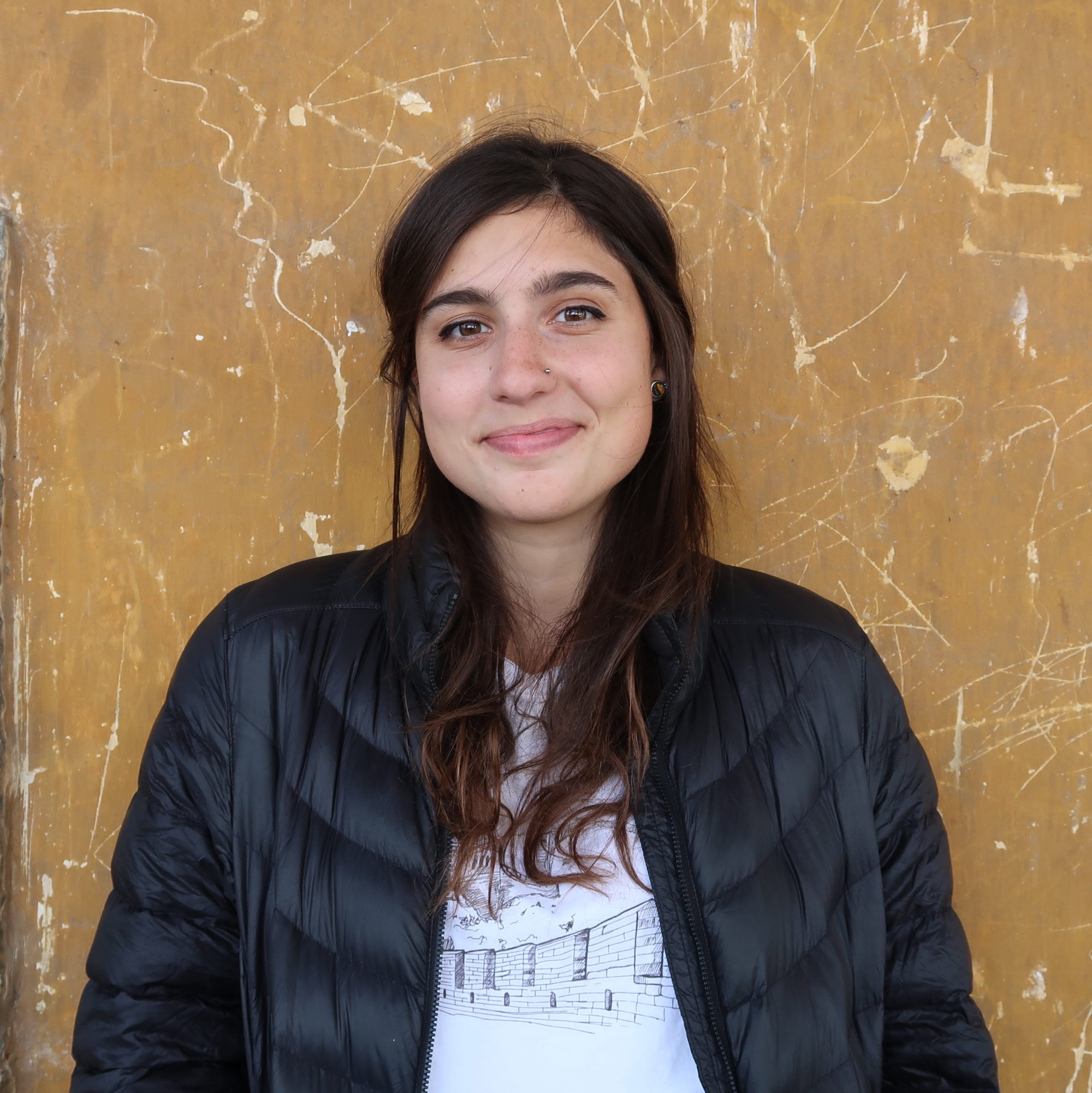 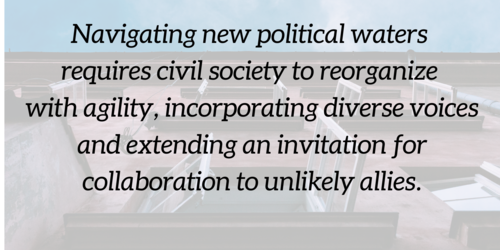 Never waste a good crisis: a maxim bolstered by a year of a global pandemic and advocacy for racial equity. Moments of political upheaval and societal distress, destabilizing though they may be, have historically been the key to opening windows of opportunity for civil society reformers to muscle through progressive policy agendas.

This past February, the Open Gov Hub held an event co-moderated by Dave Algoso and Florencia Guerzovich, elaborating on research from the Seeing New Opportunities OSF report. A panel of civil society activists from South Africa, Guatemala, and Slovakia shared their perspectives with reformers’ eyes, revisiting their experiences of building civil society coalitions, mitigating backlash and backsliding, and dispensing practical advice for fellow US-based reformers. Their insights speak to the core of Global Integrity’s Outside/In series and our Defending Democracy program.

The United States is hardly alone in grappling with demagoguery, rising inequality, and the pernicious effects of misinformation and civil distrust. Reformers would do well to invite the wisdom of experience of civil society activists from abroad, who have faced their own successes and failures in the recent past.

Gabriel Wer, Executive Director of Institute 25A in Guatemala and co-founder of the #JusticiaYa social movement, cut his teeth as an activist during the corruption scandal of President Otto Perez Molina in 2015. The investigation resulted in nation-wide demonstrations and district protests, with Wer at the center of the conflict, “in the trenches, in the street”. For civil society groups across sectors to come together and agree on something precise and concrete, it felt like “driving, and all the lights suddenly turned green. You just go.”

Zen Mathe, a researcher with Open Secrets, a South African non-profit organization that tracks private sector actors’ financial accountability, understands this feeling deeply from her own experience of change in South Africa. She recalls the familiar momentum that clung to the very air in 2018, “when Cyril Ramaphosa succeeded Zuma as President, there was a sense among civil society organizations of victory, of a new hope”. However, the path was only clear because of the groundwork that had been laid in the years prior, “day in and day out” by grassroots activists. It was a moment of recognition of the power of sustained collaboration; an era known as “the new dawn.”

Radovan Pala, lawyer and Advisor to the President of Slovakia recalls the outbreak of protests in Slovakia in 2018, prompted by the killing of a journalist and their fiancée. As Pala remembers it, “people started pouring into the streets; not hundreds of people, not thousands, but tens of thousands”. Despite its post-communist transition to democracy twenty years ago and induction into the EU, Slovakia remains dogged by endemic corruption, a form of state capture that has enabled the government to commit and cover-up civilian murders.

Upon the resignation of the sitting Prime Minister Robert Fico, Pala saw new individuals come into power under the guise of reform; “camouflage put in place by the government”. Slovakians were betrayed as much by incumbent corrupt officials as incoming agents of change, noting that activism alone does not endow an individual with moral rectitude. He cautioned, “just because someone is a dissident, does not mean they are a person with integrity. They may still fail when it comes to addressing real dilemmas. The people will lose real hope if those who promised anti-corruption reform don’t end up making meaningful change.” 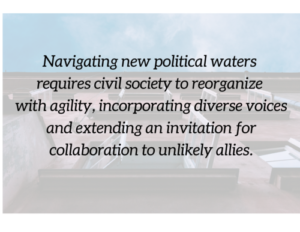 Due to the tendency of activists to “hand over the baton” to a transitioning government, the fervor of changing winds may end up working against civil society reform. In South Africa, reformers nearly demobilized as a collective, but quickly realized that the new state would not self-regulate. Without civil society as a watchdog, changes can remain “surface-level” and fail to materialize into permanent policy shifts. Navigating new political waters requires civil society with reorganization and agility, incorporating diverse voices and extending an invitation for collaboration to unlikely allies. As Yeukai Mukorombindo, research and learning manager at GI pointed out during the event, it’s vital to “continuously organize, even when it seems like change is in the air. We cannot be complacent during promising times.”

Wer advised to be quick with specific policy proposals and maintain a baseline consensus among groups — watching for the public and hidden discourse of politicians who promise reform but fail to deliver. Unconventional allies may emerge, and activists must bear in mind that although they “may sit down with people they wouldn’t usually sit down with, it’s a coalition that need only exist within the window”. Agility is key, but honor the agreements, and “do not let [opponents] take control of the narrative”. Wer warned against organizer and supporter burnout and backlash, “in a political, legal, economic, and emotional sense.”

Fractious times are necessary to move the needle of public opinion and crank up the heat for politicians to back up rhetoric with political will. The current healthcare and financial crisis – inadequate vaccine distribution and mistargeted emergency cash transfers – exposed systemic inequalities and institutional inefficiencies. 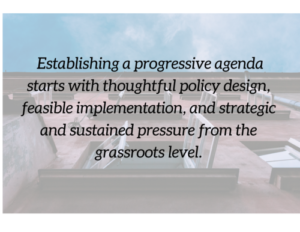 The policy paradox prevents legislative proposals from being enacted without a political environment that is receptive to pushing them through. The inauguration of the Biden-Harris Administration has ushered in new hope, but establishing a progressive agenda starts with thoughtful policy design, feasible implementation, and strategic and sustained pressure from the grassroots level.

It is early days yet, but the passage of significant legislation benefiting working families has already come in the form of the American Rescue Plan Act of 2021 (H.R. 1319). This economic stimulus package includes increased state and local budgets, subsidized healthcare premiums, childcare subsidies for essential workers, and expanded tax credits for low- and middle-income families. Although ultimately not included in the final bill, a nationwide $15 minimum wage shot up in national polls and sparked conversations on labor market reforms.

Couched in the language of crisis, the COVID-19 relief bill brought United States legislators to the table for the first time in decades, fighting tooth and nail to repair and expand social welfare systems. This strategic framing epitomizes the fertile ground for open government reformers and civil society activists to work together on sustainable and meaningful change.

Categories: Defending Democracy: Lessons from Around the World, Outside In, UncategorizedMarch 24, 2021Leave a comment
Tags: democracyDialogueelectionsIdentity Politics