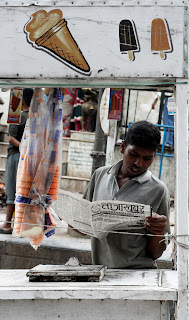 Journalists in Nepal are currently under intense pressure, a distressing departure from the generally positive transition from absolute rule to democracy.

King Gyanendra led a brutal campaign to censor the media after dismissing the elected government in February 2005. Weeks of public protest forced Gyanendra to abdicate in April 2006, leading to the reinstatement of the legislature and other democratic institutions. Yet despite the welcome return of popular rule, Nepalese journalists continue to face threats and harassment today.

In June of this year, two newspapers were forced to suspend publication because of pressure from a trade union affiliated with the Maoist party, which now shares power in Parliament. This was widely perceived as a move to influence media coverage of the party. According to IFEX, an international coalition of media monitors, more than 116 journalists have been threatened, abducted, or harassed in the first six months of 2007 alone despite the passage of the Right to Information Act. Assessments by the Committee to Protect Journalists and Reporters Sans Frontieres report similar findings.

These reports illustrate the systemic governance challenges facing Nepal, challenges highlighted in the 2006 Global Integrity Report, which assessed more than 40 countries across nearly 300 indicators of good governance and anti-corruption mechanisms. Nepal earned a “Very Weak” overall rating, in part due to serious problems with freedom of the press. Despite a “Very Weak” rating in the Media sub-category, Nepal fared better in that area than its South Asian neighbor Pakistan and ten other countries covered in the assessment. However, the Global Integrity data also reveals that Nepal, along with such countries as Armenia, Brazil, Egypt, Kenya, Philippines, and Tajikistan, faces particular problems when it comes to protecting journalists from harassment, an assessment the more recent IFEX, CPJ and RSF reports confirm. Additionally, despite the restoration of free speech, Nepalese media is still heavily politicized.

Nepal is at a critical crossroads. As investigative reporter Hari Bahadur Thapa observes in The Corruption Notebooks 2006, while there is “cause for hope” with the reinstatement of Parliament, the “newly restored government has its hands full” when it comes to combating corruption in the political and economic spheres.

Government support for the rights of journalists and press freedom is an important step in the broader process of consolidating democracy and good governance. To date, this step remains to be fully taken.