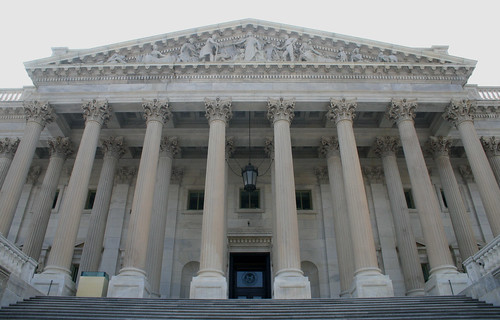 Here in the U.S. we’ve seen 7 years of radical expansion of executive branch power. The most frustrating aspect of this power-grab has been the near unanimous lack of opposition from Congress. With a few exceptions, the legislative branch has been unwilling to really push back against the Bush White House. Until today, when both parties rallied to defend their turf from Mr. Bush’s meddling.

Congressional leaders of both parties, who are scheduled to meet on Tuesday with the president, said Mr. Bush would provoke a huge outcry on Capitol Hill if he ignored those earmarks. (New York Times)

On what crucial issue is the Congress so determined to prevail? Protecting Congress’s ability to secretly channel money to pet projects.

At issue are earmarks, a non-transparent budget practice that allows members of Congress to send federal money to specific projects, without disclosing the member’s connection to the project, or even the name of the person who included the earmark. Bush wants to ignore them unless they are written into the actual law. Congress rather likes their closed-door system. The only thing that keeps this from being scandal material is the fact that it happens all the time:

A new tally by the White House Office of Management and Budget shows that the 2008 spending bills signed by Mr. Bush include more than 11,700 earmarks, totaling $16.9 billion. (New York Times)

If only Mr. Bush’s insistence on warrentless wiretapping, military tribunals, or the expansion of political appointments had met with such determined resistance.