Italy: Prodi out. Berlusconi back?

Italy remains without a formal government (AFP story) since Prime Minister Prodi’s ruling coalition collapsed — triggered by a corruption investigation — earlier this week. Much of this week’s drama can be pinned on a new election law which tends to create radically unstable coalitions. Talks are underway to replace the law prior to new elections. 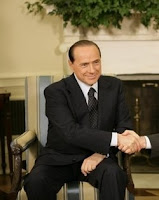 Into this mix launches Silvio Berlusconi. The former prime minister wants new elections held immediately, potentially winning big for his center-right bloc before the left can regroup. Berlusconi pushed through the doomed election law shortly before leaving office in an attempt to limit an expected win by the left. Mission accomplished, I suppose.

So what might a Berlusconi return bring? In a flashback to 2004, we offer Global Integrity’s Italian reporter, Leo Sisti’s take on anti-corruption under the Berlusconi government. His analysis was not encouraging:

The current [2004] government has done nothing to fight corruption. Instead, as already reported, Prime Minister Berlusconi worked to stop his trials connected to kickbacks. In 1997 the former center-left government tried to set up a special anti-corruption commission, an enforcement agency empowered to investigate MP’s assets, as well as the assets of major city mayors, state managers, and directors of local bodies (regions, provinces and town councils). Rules for lobbyists and a national register of government-funded contracts were also planned. But in 2001 the Parliament was dissolved and the anti-corruption commission died with it, destroying every chance to open a door towards accountability and openness in the Italian government.

The attitude of the Berlusconi government is obvious. Far from rooting out corruption, the center-right coalition instead decided to set up a parliamentary commission to investigate the magistrates who carried out the “Clean Hands” investigations. Officially, the commission wants to scrutinize facts around “Bribesville” (Tangentopoli, as this operation was dubbed by the media), looking into the “Clean Hands” operation dating back to the early 1990s. But the Milan prosecutors are the real target, even if their investigations were later confirmed in courts through thousands of convictions for corruption. It’s a vendetta by Berlusconi, who is trying to get rid of the part of the judiciary that he says used its power against him. (Global Integrity Report: 2004)