Bill Clinton goes to Kazakhstan and everyone wins 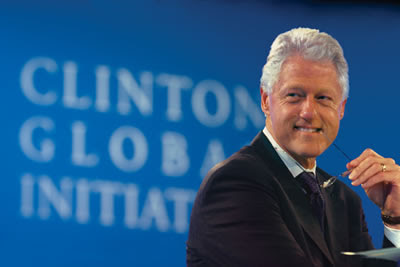 A Canadian mining mogul, Frank Giustra, flies to Kazakhstan and meets with de facto president-for-life Nursultan A. Nazarbayev. Bill Clinton tags along. The three have dinner together, and shortly afterwards, everyone wins.

Two days later, Giustra secures a lucrative mining deal to extract uranium from Kazakhstan. Nazabayev secures the endorsement of Bill Clinton, receiving praise for “opening up the social and political life of your country.” (Which for the record, our data shows has not occurred). And a few months later, Bill Clinton’s foundation receieves US$31.3 million from Giustra. A nice little thank you.

Clinton says it’s all coincidental and they never discussed mining. When Giustra is pressed by the Times, he says he “may well have mentioned my general interest in the Kazakhstan mining business” to President Nazabayev on the night they met.