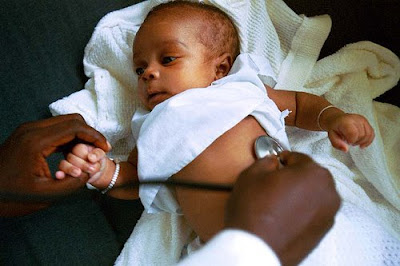 Global Integrity contributor Thompson Ayodele writes in with an analysis of aid, public health campaigns, and the corruption that prevents medical care from reaching the people who need it most.

Health, Africa’s struggle
Foreign aid is flowing in in large amounts, but it’s not reaching the people

After decades of neglect the provision of effective health care is becoming one of the biggest concerns in Africa.

Both foreign donors and African governments are keen to make this their priority and, consequently, the money taps have been opened.

Foreign aid in the form of hard currency is flowing in unprecedented quantities into the ministries of health of many African countries.

But despite this generosity things are not improving : medical staff are demoralized, access to essential medicines remains low and corruption remains a serious problem.

Development assistance for health has increased from about R20billion in 1990 to more than R104billion in 2005. Overall, about 10 percent of Africa’s health care expenditure is now financed directly by donor aid.

Nevertheless, the majority of African countries are way off track with progress towards the health-related Millennium Development Goals.

Around the world more than 10million children in developing countries die unnecessarily from diseases that are easily preventable and cheap to treat, such as diarrhoea, measles and malaria.

Furthermore, up to 80 percent of Africans have to pay for treatment straight from their own pockets. In short, public health systems are failing to deliver.

A major factor behind this failure of foreign aid to improve health care is the fact that nearly all of it first passes through health ministries before it reaches patients.

According to studies undertaken by the WHO and the Centre for Global Development in Washington DC, bureaucrats have little idea of what actually happens to the money after it is handed over to governments.

As a result of these lax controls, a great deal of this money is subverted by health officials for private gain, particularly in countries that have a problem with corruption. This can occur in the ministry itself, or further down the line in the hospital.

A study by Maureen Lewis of the World Bank shows that corruption in the healthcare sector of developing countries is so bad that it severely undermines the effectiveness of donor funding.

The leakage of drugs from the supply chain is a particular problem, mainly since publicly funded drugs can fetch a high price if stolen and resold on the black market.

Recent surveys in Nigeria show that 28 public health centres had received no drugs from the federal government in two years.

Meanwhile, a 2001 study by the World Bank showed that fewer than half of government health facilities in Lagos and Kogi states had received drugs from the federal government.

Last year National Agency for Food and Drug Administration and Control boss Dora Akunyili disclosed that it is commonplace for donated drugs such as vitamin A capsules, Mectizan and Coartem tablets and oral rehydration salt to be pilfered and resold on the open market.

In the same vein it was reported that the Global Fund was considering suspending two of Nigeria’s five-year grants totaling R640million because of concerns over grant management, transparency of fund allocation and grant implementation and the ability of the Nigerian government to achieve the goals of the grants.

The Global Fund has already terminated grants to Uganda and Chad.

And this is not counting the dozens of other forms of corruption that plague the health system in Nigeria, including mismanagement of funds at the ministry and hospital level; absenteeism; staff extracting payments from patients for services that are supposed to be free; and the abuse of procurement contracts for supplies.

According to the NGO Human Rights Watch “the government’s failure to tackle local-level corruption violates Nigeria’s obligation to provide basic health and education services to its citizens”.

Add to this the chronic mismanagement that has left health workers owed months’ pay and hospitals with obsolete equipment, and it seems hardly surprising that donor funding is not making much of a difference to patients’ health.

Healthcare delivery in Africa is never going to improve while it remains under the control of the public sector.

Government ministries have very few incentives to deliver care to patients other than the goodwill of their staff.

As any manager of a private company will tell you, relying on this alone is not going to keep your customers. Unless there is a significant change in the way we manage the health sector, there will be few improvements – no matter how much money donors spend.

Bearing in mind the historic failure of African public health systems to provide citizens with the care they deserve, we should shift towards a situation in which governments no longer provide and manage all health care. The private sector should be given a far bigger role as well.