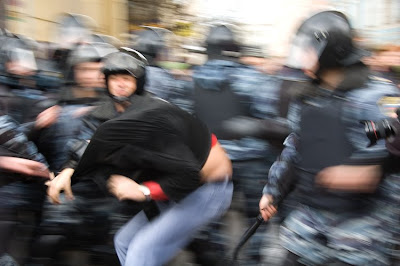 One day in April 2007, human rights lawyer Olga Tseitlina got a sudden call to a St. Petersburg police station. She had been asked to represent a client detained and fined for allegedly swearing in public. She soon discovered that police had used similar evidence against nearly 100 others.

They had all been rounded up during an April 15 demonstration called by an opposition group, The Other Russia Coalition. In theory, the right to protest is guaranteed by the Constitution of the Russian Federation, but Tseitlina alleges that Russian police use any means they have to suppress such events.

“One police statement ordering a person’s detention for swearing in a public place may not look suspicious. But if we collect more than 50 identical statements… then it becomes clear that the evidence was contrived,” Tseitlina said.