Here in the US the ongoing presidential race is an endless source of speculation and debate, with VP selection now feeding the media churn. The process has been brilliantly skewered by the Daily Show: “That’s not a question, that’s a just bag of words!” While we like to claim the high road, we just can’t resist contributing. We will, however, restrict it to our off-duty hours. A sunburned Nathaniel Heller hits the VP story while (allegedly) on vacation.

Having lived and worked in Washington for more than 30 years, I am getting an increasing number of questions from friends and colleagues asking my opinion on the 2008 U.S. presidential race. Although I worked briefly on Capitol Hill and have experience in the U.S. foreign policy establishment, it’s not as if I’m some politics wonk who checks the blogs on Politico every two hours.

That said, I did wake up this morning (on vacation in St. John, U.S Virgin Islands, thank you) with a brainstorm I felt compelled to share regarding Senator Barack Obama’s search for a vice presidential running mate.

[Obligatory disclosure note: Global Integrity is a non-partisan organization with no official position on the presidential race or its candidates. These are merely my personal thoughts.] 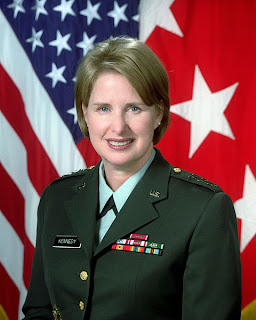 One name that I am surprised has not surfaced as a possible VP for Obama is Claudia Kennedy. The conventional wisdom holds that Obama needs a VP with national security credentials to bolster his image as commander-in-chief; thus names like Chuck Hagel, Jim Webb, and Wes Clark continue to pop up (I personally find Webb the most compelling running mate of the three, given that Virginia is in play for the first time in generations for the Democrats this fall). But Kennedy offers an intriguing mix – a woman with similar defense credentials who offers the bonus characteristics of a) being a baby boom woman, helping Obama woo back the Democratic female vote that is so passionately in support of Clinton, and b) being very close to the Clinton camp, which helps to mend fences within the party more than a choice like Clark could ever do.

For the uninitiated: Claudia Kennedy was the Army’s first three-star general, appointed by President Clinton to the post of chief of army intelligence during his second term. Her military career came to a rather ragged end after she accused another officer (and would-be Inspector General) of sexual harassment, sparking a scandal and leading to his resignation. Since her retirement, her name has popped up as a possible Senate candidate in California, and she endorsed Hillary Clinton during the primary campaign.

What’s slightly less known about Kennedy is her personal closeness to the Clinton camp, specifically Clinton campaign chairman Terry McAuliffe. Several years ago, a young reporter working at the Center for Public Integrity (ahem) revealed that Kennedy was in business with McAuliffe while still on active duty in the Army, serving on the board of a McAuliffe-led start-up insurance company in Florida. The business relationship skirted the lines of impropriety, although Army lawyers insisted that the relationship was legally kosher (even if it didn’t necessarily pass the smell test). Also interesting — at the time, Kennedy was rumored to have personal ties to McAuliffe’s father-in-law, Richard Swann.

So the next time someone asks you who Obama will pick for vice president, give them a true “inside the Beltway” name – Claudia Kennedy.