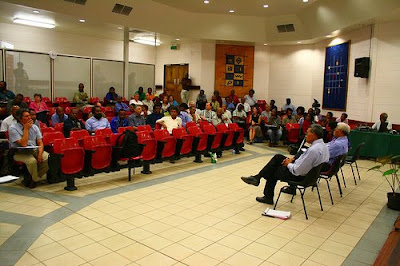 Last month, Global Integrity’s Raymond June & Jonathan Werve visited Papua New Guinea (PNG), where we talked with our local research team, as well grassroots advocates, journalists, government officials and academics about the dire state of governance in PNG. In the process, they identified several areas that urgently need to be addressed. This is what we learned. 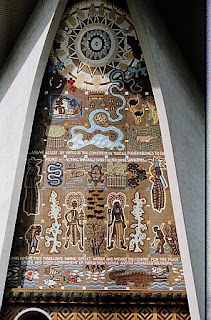 This inscription on the mosaic of the National Parliament building in PNG’s capital city, Port Moresby, seems to take on added poignancy in light of the country’s current governance crisis: the people want change. It’s the elected officials that need to get with it.

The story of PNG is familiar, but no less tragic for it. Newspapers describe a daily stream of scandal and public outrage. Street violence pervades the capital and countryside; many say the police are frequent perpetrators. Winning reelection is nearly unheard of; politicians appear to embrace the one-term nature of their posts as an excuse to steal while they can and deal their way into lucrative post-government employment.

So where do we go from here?

In June 2008, Global Integrity facilitated a one-day Global Integrity Dialogue workshop (pictures here) held in conjunction with the “Inclusive Approaches to Good Governance” symposium at the Divine Word University in Madang, PNG. There was a robust debate over the key governance and anti-corruption challenges facing PNG as well as a productive brainstorming session on opportunities for reform. Participants included a range of stakeholders from government, civil society, and the donor community. This is what they suggest:

1. Support good leadership. Participants agreed that effective leaders were important in strengthening good governance in PNG. While action at the grassroots level is important, higher authorities and institutions that promote good leadership play a key corresponding role in executing change and ensuring compliance with legal regulations.

2. Bolster capacity at the local, sub-national level in order to decentralize national power. Political economic power tends to be concentrated at the national rather than the local/provincial level in PNG. Although participants agreed that an increase in support of local capacity building would be important to disperse national power, local capacity such as developing civil society organizations and teaching literacy has not sprung up to a satisfactory level. Despite the relative weakness of civil society in PNG, churches play a significant role in promoting good governance.

3. Strengthen education and training. Lack of literacy and/or formal education is a significant impediment to social, legal, political, and economic reform in PNG. The high rate of illiteracy was seen by participants as damaging to reforms related to good governance as well as citizens’ right to know. Local PNG universities offer capacity building training programs and there was a suggestion that the PNGIPA (Institute of Public Administration) could partner with a local university to offer accredited training programs to public servants so as to build capacity at the provincial and local level.

4. Comply with and enforce existing laws, especially in the mining and logging industry. Despite the existence of several legal regulations, participants largely agreed that compliance and enforcement of these laws were weak at all levels of government. Effective training, incentives, and checks and balances were viewed as important for compliance and enforcement to take place (particularly in the logging and mining industry).

About the Global Integrity Dialogues

Globalization and Governance in the Pacific Islands, edited by Stewart Firth

Governance Challenges for PNG and the Pacific Islands, edited by Nancy Sullivan