China Is Shaken, But Sadly Unchanged

Earlier this week, the Chinese government ended earthquake-relief efforts in Sichuan province, withdrawing troops and transitioning from disaster relief to reconstruction. As they rebuild, critical issues of corruption and lax building codes may remain unaddressed.

It seems clear that corruption and poor governance in China contributed to the impact of the May 2008 Sichuan earthquake. First, building codes instituted after the even deadlier Tangshan earthquake in 1967 appear to have been poorly enforced. Second, there is evidence that Chinese scientists had alerted officials to a “potentially catastrophic earthquake along the Longmenshan belt” (New York Times), yet few possible precautions were actually implemented. While earthquake prediction is an imprecise science, the lack of attention to warnings now seems tragically shortsighted.

The Sichuan earthquake demonstrates the horrific results of a government that runs on bribery. A generous “gift” to a public official is standard operating procedure, thanks to poor transparency and ever-present bureaucracy of the Communist government. (See our Reporter’s Notebook: China) 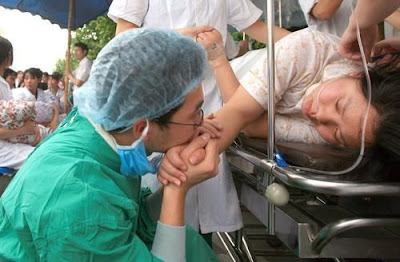 The unofficial system of bribes is far from harmless. Rebar (a metal reinforcement for concrete) is expensive — the more builders skimp on the rebar, the more money they can put in their pockets. If bribery is cheaper and less risky than building to code, the cost-benefit analysis is clear. This fundamental tension between capitalism and healthy government oversight exists in any country, not just China. Consider two examples: “the Kocaeli earthquake in Turkey on August 17, 1999, which killed approximately 14,000 people and the Kashmir earthquake on October 8, 2005, which killed over 90,000 in Pakistan and India. Many of the deaths in both earthquakes were blamed on the corruption and poor oversight of building code inspectors in the years prior to the quakes. It is after such tragedies that the real costs of corruption can become disturbingly clear,” writes Bruce Wydick in Games in Economic Development. The only real solution is to increase the “costs” of bribery — through transparency and prosecution mechanisms that make the risks unacceptable.

As we have now learned, public school buildings are prime prey for rebar-skimping because none of the stakeholders (teachers, students, parents) in the school have the authority or the power in the government to effectively oversee the project. An extremely controversial picture removed from the web shortly after it was posted “…showed a hand clutching a twisted piece of steel rebar that looked no thicker than a pencil, taken from the ruins of the middle school in the town of Juyuan…” (Associated Press, via this blog.)

There is one case of a citizen going above and beyond, Mr. Ye Zhiping, the principle of ” [… a] school in Peace County [which] probably withstood the 8.0-magnitude earthquake because he pushed the county government to upgrade it.” (New York Times) But Mr. Ye’s story is the rare exception.

Standing in the rubble of the collapsed schools, parents were crying for accountability and change. But the Chinese government is quite experienced at silencing dissent. Government censorship cops are working to prevent parents who lost children finding justice — including buying off parents with hush money. It seems the Chinese government will remain just as unresponsive and unaccountable as it was before the Sichuan earthquake without lasting consequences for the government. Meanwhile, there is little to indicate that China will be better prepared for the next natural disaster.

Read more on corruption in China…