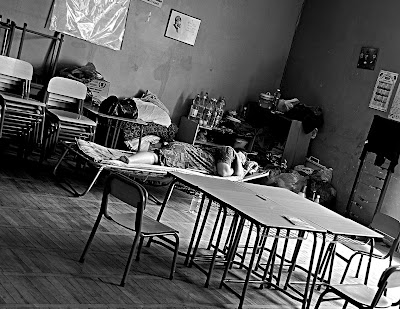 Global Integrity’s Olgha Tsiskarishvili–Soselia reports from Georgia on the fate of civilians who have fled the advancing Russian invasion. Her interviews provide unfiltered, front-line accounts of the cruelty and disruption of war.

Fugitives of War
By Olgha Tsiskarishvili–Soselia

Eight-year-old Aleqsandre tried to make catapult. He tried to protect his mother and her friends, from aircrafts which were flying above Georgia. On seventh of August, 2008, the Russian Army entered Georgian territory, sending a flood of civilians fleeing the advancing Russian tanks and bombers. Today, Russia and Georgia have an official ceasefire, but hostilities have continued. Undisputed information is hard to come by, however one thing is clear: for the people of Georgia, the effects of this war will last long after the final shots are fired. 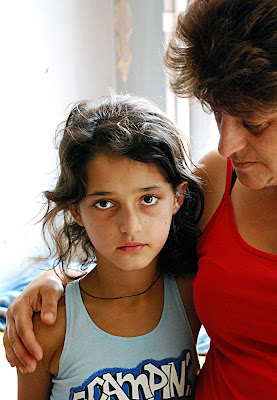 Thousands of refugees are in Tbilisi looking forward to the moment when they can return to their flats and houses. Collected here are the stories of these Georgian citizens coping with the aftermath of the Russian invasion.

Megi Modebadze is 37 years old. She is a conductor of the Tbilisi-Zugdidi train. She tells me what she saw: trolleys full of terrified people, no places even to stand. I will never forget their faces, she tell me. They told her how people had been killed, how their wives had been abused. Her train was one of the last, entering Tbilisi after terrible bombing. Eastern and Western Georgia has been finally parted.

Most of schools are full of refugees, There are fifty-one families in Isani-Samgory 40th secondary school. 136 are in this school; there are roughly 140,000 more elsewhere. Among them are babies, infants and old peoples. They lack even basic supplies. 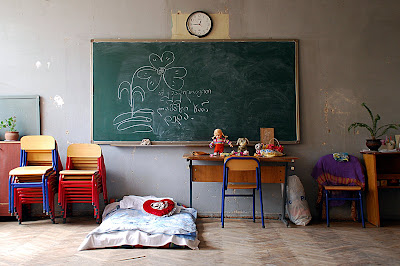 Nana Chekurashvili is director of the 40th secondary school. “Refugees entered our building on 13th of August,” he tells me. “Patriarch is helping us with everything, they can – meals and things. Rusudan Kervalishvili helped us greatly, but this is like a spoon of water in an ocean. People are trying all their best to help refugees. Seventy nine percent are still sleeping on the floor. One of the refugees is pregnant; there are Osetian families too. Every room is occupied by them. On September 1, we have another problem: we cannot start the semester.”

Manana Arkhosashvili ran away from the war with her 13-year–old son George and 10-year-old daughter Inga. “When they started bombing, we ran away and the driver stopped the car on the road and we came here. Our acquaintance took us in one of the hotels, where fifteen people were living in one room.”

“We can suffer through anything,” she tells me. “But they are children.” 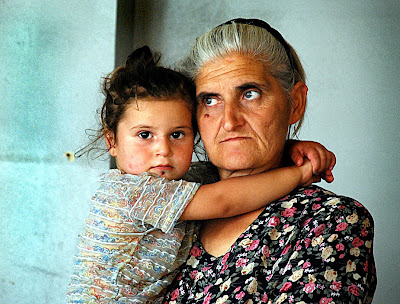 Gulida Kakhniashvili is from Shindisi “I took one boy with me. Another stayed behind with my husband. My husband told me, he should take care of the bodies there. My son called me, telling that now everything is going to be all right.”

“Villages are full with dead bodies.” Gulida says. “Out of 1500 families, there are only 15 or 20 men. My neighbor was killed in a such terrible way that, his body parts were gathered to bury. We managed to run away by bus. We are absolutely dependant on teachers and people.”

There is one couple in the 40th school who want to get married – twenty-year-old Maia and twenty-seven-year old Tamazi from Oseti. “Tamazi came to buy rings for us; it was the seventh of August,” recalls Maia.

“We were standing near a window when the army base was bombed,” says Tamazi. “[The base] was near her house. I took her hand and we ran away. Nothing was vivid. I was on taxi; they were by minibus, so we lost each other, but I found her.”

“When I saw him, I cannot express what I felt. I would have never imagined that I could have been so happy,” says Maia. “We are looking forward to the final end of the war.”

“We wanted the wedding at the end of the month, but now who can dream of a wedding?” says Tamazi.

Maia’s forty-six-year-old mother is with them.

“My husband is Georgian, I am Armenian. There is no bad nation; there are bad people in every nation. We have Russian relatives.” She is taking care of eight-year-old George Valievi, Tamazi’s nephew. They are living in a school with two beds for thirty three people.

Laura Merabishvili (57) – “I was standing with my neighbor, we saw four aircraft. We were talking and looking at them, suddenly the back part of the planes opened and something was thrown away. I hid behind a garage. My neighbor was injured and she was calling for help. She was taken to the hospital. My girl was looking for me, finally she found me and we went to Akhalkalaki and stayed there. We were told that circumstances were bad even there.” 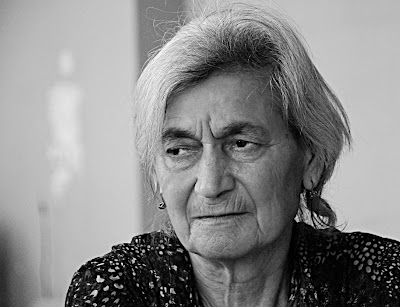 Marina Sachaleli (48) from Svaneti is mother of three children. “I could not imagine that we could be destroyed and demolished in such way,” she says. “My son was in Kodori; I was praying all the time, and I was waiting for his phone call. Finally he called me telling that he is alive. My husband tried to control himself, until Reha, Svaneti and Karaleti were burned. Men were killed, women were abused. We went to Kaspi and later here. We will be saved by our belief; we are strong people.

“A Russian women is living with us,” says Marina. “I have never noticed any kind of aggression with her. Everybody is helping her like they do with other people.”