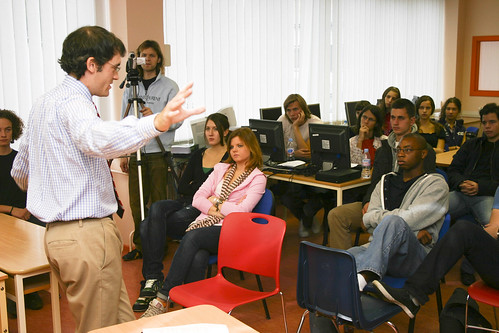 Today began the first discussions in what will be a two-day Global Integrity Dialogue event in Riga, the capital of Latvia. Unlike previous Dialogue events, which have typically been single-day workshops for a pre-determined set of attendees, the Latvia events are a series of separate brainstorming sessions with different audiences from government, academia, and civil society.

First off today was a visit to the International School of Latvia to chat with 11th and 12th graders about corruption and bribery. What I learned:

• These students, from dozens of countries around the world, seemed much smarter than what I remember of myself at 17 years old.

• At my polling, roughly half said they knew of someone who had bribed a teacher for a grade or a health practitioner for medicine or to receive treatment.

• They worry about whether it’s possible to break the patterns of corruption they see all around them in Latvia.

• I worry more about talking to 17-year-olds than I do to ministers and members of Parliament.

In the afternoon, our friends at the local think tank Providus helped to arrange for a roundtable session to discuss “Accountability of Politicians in Democracy: Beyond Legal Requirements.” Attending were the former head of the Latvian Constitutional Court, a member of the national legislature, several well-known academics, and representatives from Providus and the local Transparency International chapter, Delna. What I heard in this discussion was not entirely dissimilar from what the students and I had chatted about in the morning:

• Everyone agrees that entrenched patterns of special interest and political party patronage are the primary drivers of corruption in Latvia, despite what are many world-class anti-corruption laws and institutions on the books.

• Particular challenges are found in politicians’ connections to state-owned enterprises, the funding of political campaigns through shadowy third-party non-profit groups, and the election of national legislators via party lists rather than direct election.

• Those patronage networks are distorting the political process, eroding trust in government and politics, and skewing political accountability away from voters and towards parties and special interests.

• Attendees worried about whether it’s possible to break the patterns of corruption they saw all around them in Latvia.

On tap for tomorrow: meetings with the KNAB (Latvia’s renowned anti-corruption bureau) and another roundtable discussion, “Lobbying: Between Civil Rights and Suspicion – how much transparency is feasible?”

Lastly: if anyone knows of any research or other work assessing the impact of elections via party lists as opposed to directly elected lawmakers, I’d be grateful for any referrals. The clear message from our 2007 data in Latvia and today’s discussions is that one of the keys to breaking the special interest networks here may be changes to the country’s party lists system.