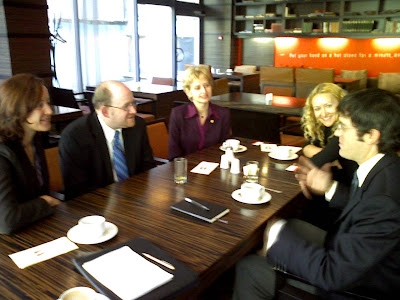 Nathaniel Heller concludes his European trip with a roundtable discussion of lobbying in Latvia, part of the Global Integrity Dialogues series. This is what we learned.

On Tuesday, September 16, our friends at Providus again helpfully pulled together a roundtable discussion, this time on lobbying in Latvia and the impact of lobbying on the country’s democratic consolidation. Attending were an eclectic mix of academics, the U.S. ambassador to Latvia, and Latvian lobbying/trade association representatives. It was a unique chance to involve special interest representatives themselves in the debate.

Several easy points of consensus emerged from the discussion:

1. Lobbying in and of itself is not an evil. In fact, it is helpful to lawmakers in any country to understand complex issues, gather additional facts and details, and weigh the opinions of commercial interests and special interest groups in deciding policy.

2. Lobbying does become a problem when lobbyists serve as major fundraisers for candidates or otherwise become sources of financial support to parties.

3. In the Latvian context, the rise of campaign costs and the role of many lobbyists as advisors and consultants to the major parties does present the risk of undue influence.

4. Any lobbying reform in Latvia should seek to regulate the industry by increasing transparency around the process (through regular lobbyist reporting and financial disclosures), not by heavy-handed restrictions.

5. There are very few examples in either the developed or developing world to point to for effective lobbying regulatory regimes. The two most robust regimes – Canada and the US – boast political systems riddled by lobbying and corruption scandals. Most Western Europe countries lack any regulation over lobbying whatsoever, and the European Union’s new voluntary registration program is a rather pathetic attempt to govern the more than 15,000 lobbyists now roaming the streets of Brussels.

My core message was: Latvia has a chance to be a world leader in next-generation lobbying reform, curbing undue influence while protecting the rights of interest groups to be heard.