Notes from the Tarmac: All Gray in London 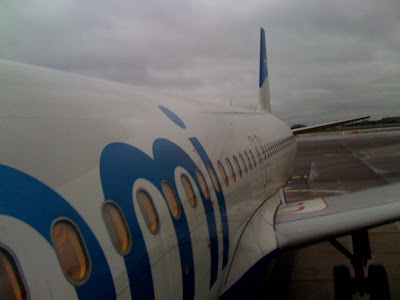 After a redeye from Chicago, your jetlagged correspondent spends an afternoon watching the news from a Heathrow lounge: Thais blitz an airport, and Mumbai grieves.

In Thailand, a well-organized anti-government faction has stormed the Bangkok airport, taking the Thai tourism economy hostage. The BBC reports that 100,000 travelers are stranded.

The BBC covers the impact on European travelers with numbing repetition — a sea of white faces in the darkest depths of inconvenience. However, the BBC anchors fail to explain what the protesting faction is demanding or explore the connections between the non-violent protests and the military junta that has been marginalized since elections resumed last year. This conflict is at its heart a battle for control of the government by an urban, upper-middle class faction that expected better electoral success than they’ve had (they say the vote is rigged). The story has been gathering momentum for months, but coverage of it seems to treat every “protest” as a spontaneous, unplanned occurrence independent of previous episodes or political meaning. The BBC is a good network, but the Thai airport takeover has apparently been kicked to the travel desk. 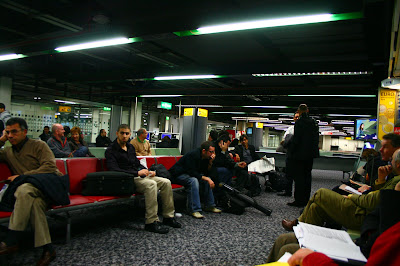 I’m watching this in a grimly austere Heathrow gate that features imposing metal and glass barriers and incomprehensible security protocols. Fellow travelers watch the news warily, alert for any sign that the chaos in Bangkok will spill over to their own lives. Coverage of terror attacks in Mumbai are oddly interspliced with the Bangkok story,along with a plane crash and an apartment block that spontaneously blew up in the London suburbs. It’s a nonstop mashup of uncontextual, scary news. Globalization, it seems, can make for unsteady nerves.

The weather report puts up a map of the UK with “COLD AND GRAY” written over the top. Quite right, chaps. Eventually I find my way back to the glittering international concourse selling “Global Burgers” and “World Wines” but I’m still thinking of the funerals in India.