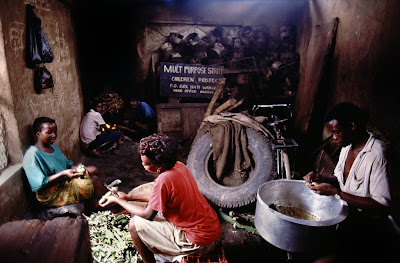 President Yoweri Museveni’s discussion of corruption and its dangers can be eloquent, tough and inspiring. It might lead citizens to believe this is the right man to wipe out corruption from the Republic of Uganda, the pearl of Africa. Not quite. Global Integrity’s Salim R. Biryetega reports from Kampala.

Since assuming his current third term in office in 2006, Museveni has often talked about tackling corruption, both inside his government and in the ruling National Resistance Movement Organization (NRMO) party. However, many Ugandans have come to realize that the tough talk is a smoke screen to distract members of the public from the true story of rampant corruption in all sectors of the government and the ruling party.

Both overt and covert corruption seems to have become entrenched in recent years.

In the assessment of the country’s auditor general, procurement accounts for 70 percent of public spending, of which 20 percent is lost via corruption fueled by weak laws and dishonest practices of government officials responsible for public funds.

What’s more, many high-profile corruption cases — resulting in the loss of taxpayer money — have involved those with connections to president’s office.

The political violence that followed the disputed elections in Kenya in 2007 made transportation of fuel and other goods to Uganda very difficult. This led to severe a fuel shortage across the country.

Many Ugandans, who had hoped that their government would release some of the fuel in its purportedly huge reserves in the city of Jinja, were shocked to learn that the reserves were empty, except for a small amount of fuel that belonged to private oil companies.

In an attempt to quickly quell public outrage, the government circumvented established procurement procedures and contracted an unknown company, Kenlloyd-Logistics, for 44 billion shillings (US$22.3 million) to replenish the reserves.

The Public Procurement and Disposal of Public Assets Authority (PPDA), which is mandated to ensure that official procurement guidelines are complied with, did halt the contract. However, many Ugandans continued to wonder how Kenlloyd-Logistics’ bid had initially beaten more established oil companies such as Caltex, Shell, Gapco or Total, among others.

It later emerged that Kenlloyd-Logistics was being run by a son-in-law of powerful Foreign Minister Sam Kutesa, who is also an in-law of the president. One of Kutesa’s daughters, Elizabeth Kyomugisha Kutesa, was also linked to Kenlloyd.

As the 20-year conflicts in northern Uganda between the rebel Lord’s Resistance Army (LRA) and the government quiet down, there are efforts to resettle more than 3 million people who have lived in camps for internally displaced persons. One program includes supplying people with seeds and farming tools to enable them to grow food and stop depending on food aid or handouts from the government or other relief agencies.

Gulu District Chairman Norbet Mao, a member of the opposition Democratic Party, blew the whistle on the lax oversight of this program and said people were supplied with rotten seeds and substandard farming tools.

“People were given seeds that could not germinate, machetes that could not cut, and hoes that could not till the ground. Millions of government funds were spent on procuring these products, but it seems there were no procurement checks and balances in this government. Nobody cares whether or not what has been supplied is value for money,” Mao said.

Reports on the November 2007 Commonwealth Heads of Government Meeting (CHOGM) held in Kampala indicate that billions were lost through corruption. Semujju Nganda, political editor of the Weekly Observer Newspaper and one of the leading journalists in Uganda, has previously exposed corruption in government and discovered that CHOGM spending practices were no exception.

More than 53 billion shillings (US$26.9 million) was budgeted for CHOGM purchases, including vehicles, hotels, security equipment and road repairs. In digging through such procurements for the meeting, Nganda was stunned by what he discovered.

“Can you imagine? During the last CHOGM 2007 summit, top government and ruling party officials went to Europe to collect about 200 rejected junk BMW vehicles that were to be used by delegates for three days at a hiring price of 50 million shillings (US$25,355) per day?” Nganda said.

He added that the vehicles bought by government officials did not measure up to required standards, as some were not roadworthy and others were manual, even though the contract clearly specified that new automatic vehicles be provided.

Nganda describes CHOGM 2007 as an opportunity for those in power to pocket government funds. Two months after the meeting, everything that had been put in place in preparation for the meeting had disappeared — even the street lighting vanished.

He says that corruption in Uganda is on the increase and that the only thing government officials are doing is finding new methods of concealing it. One tactic he points out: people lobbying Parliament for a ministerial appointment in order to have access to and pilfer from government coffers.

A recent survey by the Steadman Group, a market research and media monitoring company, found that Parliament was perceived to be the fourth most corrupt institution in Uganda. This revelation was a blow to those seeking to promote integrity, accountability and good governance in Uganda through legislative reform.

A senior investigator in the Inspectorate of Government, who requested anonymity due to of fear of reprisal, said that the Inspector General of Government, Justice Faith Mwondha, has let the country down even though the inspectorate is arguably one of the most powerful anticorruption governmental institutions in Africa. He said Mwondha is preoccupied with fighting everyone, from her staff to police, the courts, legislators, civil society, and cabinet ministers. She is also opposed to new anticorruption legislation, saying the inspectorate should be the only agency to fight corruption.

“She is so emotional and has allowed emotions and rumors to compromise her judgment,” the source said. “She is always in the news, accusing everyone of fighting her. We all work in fear because it’s either she wins or you lose. Many of our colleagues have been dismissed just because they have not done or said what pleases her.”

He added that IGG Mwondha cannot succeed if she is fighting institutions that should be her partners in the fight against corruption.

According to Charlotte Mwesigye, organizing secretary of Interfaith-based Action for Ethics and Integrity (INFOC-Uganda) and a long-time anticorruption activist, corruption is systemic, which makes it harder to detect.

Although civil society organizations have contributed to awareness of the dangers of corruption, they are not strong enough to prevent it.

Robert Lugolobi, executive director of Transparency International’s Uganda Chapter, said Ugandans talk of corruption but focus on small-time dealings instead of wrongdoing on a national scale.

Most Ugandans see small bribes given to policemen, nurses, doctors and teachers as the key corruption issue. But, he said, the governmental corruption that involves billions of shillings should be the primary focus of concern.

“Money stolen through grand corruption by government officials and employees affects the welfare of the policemen, nurses, doctors and teachers, leaving no funds to improve their pay and living standards. It affects the development of infrastructure, health provisions, etc.,” Lugolobi said.

He is concerned that citizens do not scrutinize or vet candidates’ track records before entrusting them with public office.

Lugolobi also said that members of Parliament, who voted in 2005 to remove the presidential term limit from Uganda’s constitution, are responsible for the country’s current challenges. If the presidential term limit had remained in place and forced Museveni out of office, he said, Uganda would be looking forward to new leadership that would put things right. Instead, the status quo keeps corruption entrenched in the country.

— Salim R. Biryetega is editor-in-chief of the Weekly Message