“I Was Assassinated” — In Guatemala, A President Accused by the Recently Dead 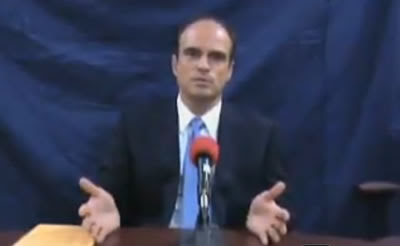 Disclosure: Global Integrity is currently advising the Vice-President of Guatemala on transparency reforms.

“If you are watching this message, it is because I was assassinated by President Alvaro Colom with help from Gustavo Alejos [the President’s private secretary].”

Those are the opening words of a video message recorded by a Guatemalan lawyer who was shot to death on Sunday, in a case that has shocked Guatemalans. The YouTube video continues with claims that the President and his wife, Sandra de Colom, are involved in money laundering, diversion of public funds from the first lady’s social aid programs, and murder.

Before he was killed, Rodrigo Rosenberg Marzano worked as a lawyer for a businessman who was also murdered — along with his daughter — in April. Marzano says in the video that his client’s name had been used without his knowledge or consent in a corrupt scheme at a bank. He alleges his client was later invited by the President to be part of the scheme but he refused to play along, which supposedly led to his murder.

At the end of the message, the lawyer asks Guatemalan Vice President Rafael Espada to “be the first to lead a movement” to rescue Guatemala from corruption.

President Colom has categorically rejected the accusations and attributed them to a “conspiracy” to destabilize his administration. “This reveals the intention of creating a political crisis around a case that should be investigated and processed by the courts,” according to a statement posted on the government’s Web site.

Colom said the government is open to “the help of any country or international organization” to investigate the case and has already asked the United Nations backed International Commission against Impunity in Guatemala (CCISIG) to assist in the inquiry.

Political leaders in the country are calling on Colom to take a temporary leave of absence to guarantee an independent investigation into the video allegations, while some Guatemalans in civil society are calling for massive protests to demand his resignation.

Clearly, there needs to be evidence to support the video’s allegations before demanding the resignation of the country’s president. On the other hand, in a country with a lamentable history of impunity and assassinations often involving those whom are supposed to protect citizens, it is unfortunately not a stretch to assume that such evidence might never be found.

The situation calls for more than just a request for “assistance” from the international community to investigate the murders. It requires a serious probe of the bank’s operations and of the first lady’s social aid programs, which have been criticized for involving kickbacks to Guatemalan social services organizations and the members of Congress who support them.

Only then will Guatemalans know whether this is another case of Presidential corruption in Latin America (such as those recently discussed in this post) or a bizarre series of unfounded allegations from beyond the grave.

Disclosure: Global Integrity is currently assisting the Vice President of Guatemala with a range of transparency reforms, as reported in this blog post.