China’s pursuit of African raw material turns to a US$9 billion mining rights deal between China and the Democratic Republic of Congo. The International Monetary Fund is critical of the deal, saying it will only add to the DRC’s staggering debt burden. But with China’s new African clout, the IMF might not matter. 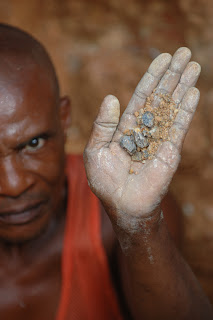 Currently, the details of the deal are as follows: China will invest a total of US$9 billion in infrastructural support (US$6 billion for roads, schools, hospitals etc. with the other US$3 billion going towards a mining project) and in return two of China’s largest state-owned companies, Synohydro Corp. and China Railway Engineering Corp., will receive mining rights to the DRC’s large cobalt deposits and roughly four percent of the world’s total copper reserves.

The IMF is concerned by a statement in the contract that holds Congo responsible for paying back the loan in its entirety should the deal fall through. The Chinese Ambassador to Congo Wu Zexian responded somewhat vaguely, saying that the Chinese Export-Import Bank is in fact shouldering the risk in this deal. As the situation stands now, the IMF refuses to grant Congo US$500 million in financial support and US10 billion in possible future debt relief until the details of the arrangement are changed.

The two powers, China and the IMF, have reached a stalemate, which raises interesting questions about the IMF’s influence in Africa. Many African countries remain suspicious of the IMF due to the often despised Structural Adjustment Programs of the 1980’s and 1990’s. Now that China has emerged as a viable alternative for aid and development assistance, the IMF appears to be losing traction. In 2005 Angola refused to comply with IMF anti-corruption sanctions on a loan, largely because of a US$2 billion Chinese loan given at the same time. This apparent torch passing also brings new relevance to the ongoing debate over whether Western aid is working.

We’ll be keeping our eye on this issue (see China/Africa updates here) and China’s engagement with Africa generally on this blog. If you are new to this issue, the following articles will bring you up to speed.

This May 2009 piece from the Economist discusses how China (and other developed countries, especially those in the Middle East) have been buying up tracts of land in Africa and other under-developed areas in order to grow their own food and import it back to sell domestically.

This raises many issues, not least among them that these African countries are often receiving food aid from international aid organizations to prevent starvation; can they really afford to have locally grown food exported by private non-native actors?

Finally, this piece from Fast Company provides background on the recent close relationship between China and Africa, as well as highlights all of the controversies surrounding this relationship. Though it’s a year old, still worth a read.

Editor’s note: we’d like to welcome Jessica to the Commons on her first post! More China in Africa coverage to come. — Jonathan Eyler-Werve