Iran’s Internet Snooping is Made in America 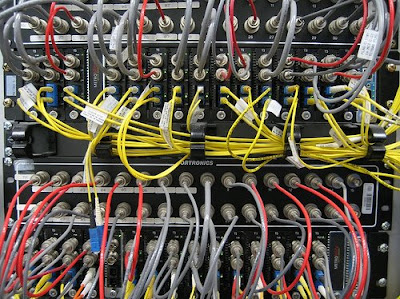 In the days following Iran’s contested presidential Iran’s Internet speed slowed to a tenth of its normal speed. What’s causing the slow-down? Western-developed technology that allows the Iranian government to analyze networks of information: who is transmitting, what exactly they are saying, and who is consuming it.

While Iran grabs headlines, the US Congress is quietly debating whether to continue use of similar technology against Americans. The US government has been intercepting and storing private emails and online reading habits of US citizens since at least 2001.

This process is known as deep packet inspection, a technology developed and sold to the Iranian government by a joint venture of European companies Siemens and Nokia. Deep packet inspection is also allegedly used by the Chinese government. But unlike the layered “Great Firewall” of China, the Iranian technology is centralized at one point. This means that all information trading must be analyzed at a single location, leading to sluggish Internet speeds nationwide when monitoring increases.

Iran’s Internet slow-down has not yet meant an Internet shut-down: a move that would crush foreign and domestic media’s close-to real-time reporting on the election protests and vivid eyewitness accounts (although social networks and SMS have been blocked at times). For more analysis on Iran’s use of deep packet inspection, see yesterday’s Wall St. Journal.

As we have seen in other countries, Internet censorship is being coupled with the more traditional forms of media repression: Reporters Sans Frontieres describes Iran this week as “the world’s biggest prison for journalists” with a total of 33 journalists and online activists in jail. RSF details individual cases here.

Deep packet inspection and similar techniques being used in Iran are also being employed aggressively by the United States government, ostensibly in its search for terrorists online.

The US National Security Agency has a legal charter to spy on foreigners online. Unfortunately Internet traffic is nearly impossible to sort by nationality of user, meaning the NSA is snooping on all US Web and email traffic and storing it, with the cooperation of US telecoms companies. This has been extensively documented in court cases filed by the Electronic Frontier Foundation, including testimony from an AT&T; cable technician who worked on dragnet hardware spliced into the Internet backbone cables routed through downtown San Francisco. The technician, Mark Klein, has testified in court that the hardware made copies of the website preferences and email traffic of all AT&T; customers and sent them to the NSA. The government did not dispute this.

The NSA has portrayed the collection of domestic email as limited, inadvertent and unavoidable, but every new trickle of information shows a more robust and aggressive domestic spying capability. As covered by the New York Times, Congress is quietly debating what to do about this, but the frame of debate is not encouraging for fans of limited government. New York Times:

“For the Hill, the issue is a sense of scale, about how much domestic e-mail collection is acceptable,” a former intelligence official said, speaking on condition of anonymity because N.S.A. operations are classified. “It’s a question of how many mistakes they can allow.”

While I might be comfortable classifying a massive government mail-reading system a “mistake,” I dispute the suggestion that the creation of a secret, unaccountable system to intercept, sort and store records of all US email and online reading habits was somehow accidental. This is a matter of policy, and it’s being conducted with little Congressional awareness, much less informed public debate. Not good.

For more on this topic, see the Electronic Frontier Foundation on spying; the Open Net Initiative on filtering; and Sesawe on countermeasures.