Notes from the Road: In the Solomon Islands, “Reform on Steroids” 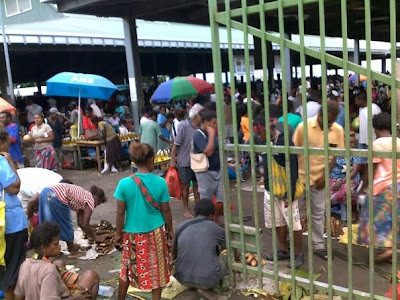 Walking around downtown Honiara yesterday afternoon, Nathaniel and I were amazed at the hectic vibe of the city. Coming from Tonga’s capital of Nuku’alofa, with its more languid pace of life, Honiara seemed pulsing with activity. It turns out this bustle of activity extends to governance and anti-corruption reform as well.

The city’s downtown infrastructure is limited to a few main streets lined with crumbling two story buildings and stained red with betel nut juice, a Solomons favorite. On the street level, mini-busses flew by shoppers who mingled around the mini marts and the one large open-air market. These markets are stocked floor to ceiling with a colorful assortment of mainly British and Chinese packaged goods: bottles of soda, noodles, baby toys, hardware, ice cream cones, you name it. Even though the inventory of each store seemed exactly the same, from what we saw yesterday, business is good.

A wave of reform…

The “fast” pace of Honiara’s city streets is also reflected in recent momentum for government reform. Solomon Island’s turnover of elected officials is exceedingly high, but the current crop of leaders seems to finally have lined things up. As one of our colleagues yesterday remarked, the vibe around Honiara today is like “reform on steroids,” and what’s happening here in the Solomons is already being talked about as an example of the possible for other countries in the Pacific and other small, developing countries.

Officials see their time in government as limited and everyone is trying to push through as much state structural reform as possible. In a country without a legacy of political parties, this could easily turn into a competitive battle of conflicting individual interests. But for anti-corruption reform, this does not appear to be the case.

An Anti-Corruption Task Force has been put into place to revamp both anti-corruption law as well as the government’s anti-corruption strategy in a day-to-day context. The Task Force draws on key offices and local experts such as the Auditor General’s office, the Prime Minister’s office, the Ombudsman, members of the Leadership Code Commission, and Transparency International-Solomon Islands. Representatives from many of those organizations will be participating in the Global Integrity Dialogue workshop on Monday. We are thrilled to add to the momentum of the moment by facilitating a discussion around priorities for reform.