Notes from the Road: Pacific Pontifications 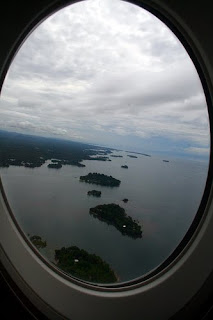 We’re cruising along 35,000 feet above the South Pacific, en route from Honiara, Solomon Islands to Brisbane and finally Canberra, Australia. The long flight offers a good opportunity to reflect on governance and accountability reform in the Pacific — what makes it easy, what makes it hard, and what makes it unique.

During the past two years, Global Integrity has had the unique opportunity to carry out national level assessments and Dialogue workshops in several Pacific island countries. In fact, I’d argue that we know a heck of a lot more about what’s going on with governance reform in the Pacific than the majority of multilateral donors, international NGOs, and expert consultants working on the issues.

I’ve personally had the pleasure of organizing workshops in Timor-Leste, Vanuatu, Solomons Islands, and Tonga, and my colleagues Raymond June and Jonathan Eyler-Werve led our efforts in Papua New Guinea last year.

What have we learned that’s unique to the Pacific? Here are a few things to chew on:

1) Wontok matters… but don’t exaggerate it.

Wontok — extended family and kinship relations basic on common geography and/or language — certainly drives much of the way society operates in the Pacific, especially in Melanesia. It acts as a default social safety net, filling a gap where government can’t provide basic services. Political leaders and senior civil servants often view their positions of authority as opportunities to distribute resources to their wontok, with the national interest taking a back seat to “delivering the goods” to ones family and hometown network.

While wontok is indeed abused in a corrupt way in many Pacific countries, I wonder whether or not we’ve gone too far in exaggerating the wontok effect as the fundamental driver of corruption in the region. There are a host of other compelling (and really big) drivers of corruption in many of the countries we’ve worked in recently — tit-for-tat competition between Taiwan and China; the role of multinational extractive industry interests; and good ole’ fashioned lack of resources and capacity, to name a few. So while the “wontok effect” should certainly be factored in when designing any accountability and transparency reforms in the Pacific, let’s not let it overwhelm (or over dilute) good ideas.

This should go without saying, but until small islands nations (whether in the Pacific or the Caribbean) stem the “brain drain” and are able to consistently fill key government positions with well-qualified and highly educated professionals, none of the “best practice” reforms are going to take hold. Coupled with severe infrastructure challenges facing many of these countries, the capacity deficit looms large for these countries. The idea of implementing a world-class Freedom of Information law in, say, Solomon Islands, is just plain goofy when you look at the shortage of professional civil servants and the country’s crumbling (or non-existent) infrastructure. Where capacity is so weak, better approaches may be the implement less-than-perfect but still helpful partial reforms. In a country like Solomons, this could mean simple practices to make governmental decision-making public without passing an ideal FOI law.

3) The best prospects for governance reform globally may lie in the Pacific.

No, that is not a typo. Despite the massive capacity issues cited above, I come away from all of our work in the Pacific convinced that the prospects for short-term reform may be best in these small, close-knit countries. This is where wontok and the “everyone knows everyone” effect comes in quite handy. In larger, more complex countries — think Nigeria, the United States, Indonesia, or India — it takes years and years to get anything moving. In Tonga, a country of 110,000 people, you only need a handful of key decision-makers and civil society stakeholders to back a reform in order to jumpstart it. Rather than ignoring the Pacific as a backwater, international organizations should look towards the region as a ripe opportunity to accelerate reforms without the baggage typically encountered in larger countries.