Has America Lost its Opportunity to Increase Financial Oversight? 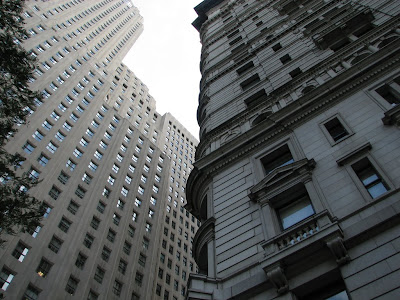 The news last week was overrun with “one year later…” stories detailing how far (or short) the U.S. economy has come since investment banking giant, Lehman Brothers, filed for bankruptcy last September. Here’s a round-up of some of the best summaries Global Integrity has come across. True to form, our take is focused more on the stalled regulations than on the speculative “what-ifs” involved with the bailout.

The most common analyses that seemed to be popping up in website browsers and political TV-shows were the reflective sort “should we have bailed out Lehman?” or “should we have bailed out at all?” While these conversations have the ability to rile some folks up, such generally soft discussions don’t inform our current financial situation. They are based on limited hindsight and too many flexible alternative scenarios. However, one fun “what if” piece we found comes from TIME’s political blog where it is revealed that Warren Buffet had been considering aiding Lehman, if only he could have worked his cell phone’s message inbox correctly. Derek Thompson of The Atlantic staff responds to TIME’s post with the grounded view that while speculation is fun, “Lehman or no Lehman, this crisis would still have been a financial calamity.”

What about the regulations?

Being the safeguard fiends that we are, Global Integrity is most concerned with tracking the regulatory changes that were meant to go along with the financial packages given to America’s big banks. Last September, the political discourse ran with the view that it was the financial regulatory system that failed Americans. Lawmakers told the public that while the bailouts were necessary to stabilize the economy now, true reform would come through increased oversight of the financial sector. While weary of the cost to tax-payers, Americans applauded policymakers for their defiance after having watched politicians bow to Wall Street for too many decades.

However, as NPR reports: “no such overhaul has occurred.”

In March, the Commons highlighted former IMF chief economist Simon Johnson’s argument that the American Congress had failed to stand-up to big business. According to Johnson, this solidified power in the hands of the nation’s oligarchs, in a way surprisingly similar to Russia. Last week, economic experts told a similar story on the New York Times opinion blog. When asked why increased regulations have not been put into place, each guest blogger speaks to Wall Street’s overpowering influence on Congress. Not to mention the fact that a “boom-bust” cycle is inherent to the capitalist system, with calls for increased regulation only sounding in periods of “bust.”

On Monday, President Obama made his own “one year later” speech just steps from the New York Stock Exchange, in the heart of the Financial District. There, the President emphasized the fact that reform is on its way, warning the financial community that “we will not go back to reckless behavior and unchecked excess.” While his statement implies that a more regulatory framework has been put in place, in reality, the loopholes are yet to be plugged. The Wall St. Journal reports Obama’s current policy agenda includes creating a new government regulatory body focused on the consumer-goods sector as well as increasing the watch-dog role of the Federal Reserve.

In our work on good governance reform, we have heard the same lesson echo time and again: timing is everything. With Federal Reserve Chairman, Ben Bernacke announcing the recession “likely over” and much of the national attention on health care reform, the window for a financial regulatory overhaul may be rapidly closing. If oversight of the financial sector is to be increased, politicians must act quickly, definitively and with the same passion displayed in last year’s rhetoric.

Eric Gundersen to Join Global Integrity Board of Directors

The Limits of U.S. Litmus Tests in Pakistan