Lawrence Lessig, Against Transparency. We’re Not 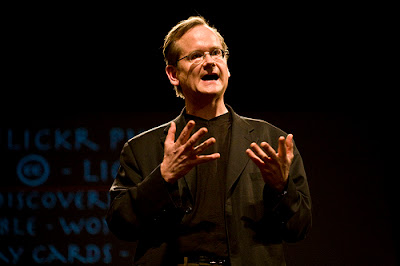 Lawrence Lessig, a seemingly reliable advocate for open information, has written a bizarre piece entitled “Against Transparency: The perils of openness in government.” He claims that the US open government movement has grown too powerful and may have gone too far. It goes downhill from there.

First, the piece is here: Against Transparency

Second: A rebuttal from our friends at the Sunlight Foundation, where Lessig is (for now) on an advisory board. (Note to self: talk to advisory board about not penning off-message opinion pieces. — Ed)

Lessig has some valid points, which we’ll discuss below. Unfortunately, they are buried in a 6,500 word discourse that tacks from government data in one paragraph to copyright protections the next. Lessig acknowledges “ the good that transparency creates in a wide range of contexts, government especially.” But he also says, “I have increasingly come to worry that there is an error at the core of this unquestioned goodness. We are not thinking critically enough about where and when transparency works, and where and when it may lead to confusion, or to worse.”

OK, maybe. Let’s go down the list of his examples.

Lessig writes: “a campaign to get members of Congress to post their daily calendars on the Internet… there were too many legitimate reasons why someone might not want his or her ‘daily official work schedule’ available to anyone with an Internet connection.”

Security concerns: we get it. Global Integrity has talked with the government of Guatemala about this very issue, and in that context (where people end up dead on the streets because of their political views), there are very real concerns over assassination and kidnap via schedule data. The US Congress? Not so much. Members of Congress do a lot of scheduled events already, apparently without incident. Their campaigns are full of them.

But the point of posting a Member’s schedule is not to know their location; it’s to know what they spend their time on and with who they spend it. These are things that can be posted with no security risk at all: a list of meetings, their length, who was there, what was discussed. Alphabetize it and post it after a week’s delay — security problem solved.

Lessig writes, “Like the decision to go to war in Iraq, transparency has become an unquestionable bipartisan value.”

Wow. The decision to go to war in Iraq remains obviously controversial, and drew hundreds of thousands of people to anti-war protests before the war even began. The open government movement, laboring in obscurity over data formats and FOIA processes, has very little in common with this. Actually, we’re not sure if it has anything to do with it.

In Washington, transparency is far from “unquestionable.” While the Obama administration has proven mildly enthusiastic over the release of government databases, it is conspicuously less so on old fashioned access to information regarding the administration itself.

“A lot of us have been disappointed and confused,” said Anne L. Weisman, chief counsel for Citizens for Responsibility and Ethics in an interview with Global Integrity this summer. “Some of the attitudes are mimicking the anti-transparency attitudes of the Bush Administration.” Particularly at the Justice Department, she says, “This is a culture that has not changed in many ways.” (We examine transparency under Obama at length in the upcoming Global Integrity Report: 2009.)

Lessig is concerned that campaign finance datasets are more suggestive than definitive as proof of corruption: “Where a member of Congress acts in a way inconsistent with his principles or his constituents, but consistent with a significant contribution, that act at least raises a question about the integrity of the decision. But beyond a question, the data says little else.”

Have you read All the President’s Men? Knowing what questions to ask is huge. It’s almost everything. You ask the right questions, you start getting answers, and you piece it together a little at a time. That’s how investigative journalism works.

Lessig: “But will not this supposed salience of money… simply inspire more debate about whether in fact money buys results in Congress?… This is the problem of attention-span.”

Lessig suggests that lots of data will spread the pernicious but unsupported claim that politicians are bought and sold by campaign donors (to think!). But a number of studies have used campaign finance data to demonstrate exactly the opposite, or to show that raising lots of money doesn’t have that much effect on winning elections. We can debate these studies, but the point is that we’re starting with hard evidence and having a rational discussion grounded in facts. That’s much better than any information-poor alternative.

Lessig quotes: “Surveillance cameras followed the attractive young blond woman through the lobby of the midtown Manhattan hotel, kept a glassy eye on her as she rode the elevator up to the 23rd floor and peered discreetly down the hall as she knocked at the door to my room… As a matter of fact, she is my daughter.”

Scary story: pretty blond, creepy camera, vindicated parent. But this is victim fantasy nonsense. Any media outlet that ran with an affair story this easily disproved would be turned into a smoking hole in the ground by a libel suit. There are rules and enforcement mechanisms already in place that mediate public information. And what does this oddly breathy vignette have to do with government transparency?

Back on topic, Lessig looks at what conflict-of-interest disclosure did to the field of medical publishing.“Like most journals in medicine, JAMA required disclosure, and was among the most aggressive in the extent and the reach of the disclosures required. But as attention to disclosure grew in the medical field, the failure to disclose adequately has become a serious charge. Omission is now a serious commission.”

If there’s contention over disclosures and unfair tainting of doctors that fail to completely disclose, let’s take it out of their hands. Switch the disclosure system to a big common database where the medical industry reports contracting relationships with doctors, much as foreign lobbyists already do. Doctors can go on publishing at will, disclosing nothing, because their business relationships (already highly regulated) are now public. No half-disclosure, no unfair accusations. [While factchecking this piece, we learned this is sometimes already happening].

Is it ever that easy? Probably not. But the point is that these issues are entirely soluble. We work on this stuff every day.

At this point in “Against Transparency” Lessig returns to ground he knows well: copyright law and file sharing. His vocal advocacy on these topics made him a hero to tech geeks and legal wonks alike, and he’s much more persuasive here.

From there we get a stirring defense of full public financing of political campaign, but are then whipsawed back to Lessig’s worries over the use of the word “fair” in the titles of legislation causing them to be overturned. Or something. When did Laurence Lessig, co-inventor of the Creative Commons license used on this site and widely respected political activist, turn into a concern troll?

Here’s where we agree with Lessig: Analysis of data is every bit as essential as access to data. And bad political metrics can take on a life of their own (we wrote an entire book about this phenomenon). But bad analysis doesn’t stop when information is scarce; it just gets dumber and louder. Clamping down the information isn’t a solution, because it doesn’t address the real danger in an opaque government: it’s not that information is gone. It’s that information becomes the privileged possession of a powerful few to use or misuse as they please.

We also agree with Lessig that transparency in public life must be balanced against privacy in private life, even for elected officials.

But our researchers in more than one hundred countries worldwide have told us again and again that the barrier to the success of “open information” regimes isn’t the technical concerns. It is the lack of political will to implement them at all. Which makes “Against Transparency” all the more weird, and all the more irrelevant to the real work ahead of us.

2 comments on “Lawrence Lessig, Against Transparency. We’re Not”

Uganda: Laws Alone Will Not Help

Letter from a Cairo Jail