Questions of Accountability as U.S. Sends Billions to Pakistan 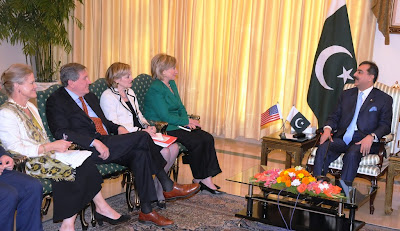 A dispute in Washington over who should control the disbursement of billions of dollars in new foreign aid to Pakistan is bringing government accountability and corruption issues in the country to the forefront of the U.S. foreign aid policy debate. Following Congress’ appropriation of $1.5 billion in the first-round of aid, two sides were formed over where the money should go first – Pakistani groups or Western aid organizations? We look at the Global Integrity Report: Pakistan for insight.

Supporters of direct local investment, led by U.S. Special Representative for Afghanistan and Pakistan Richard Holbrooke, say the money will have more impact and avoid overhead costs if it skips the bureaucratic hurdles of U.S. aid organizations. Opponents of this approach, led by USAID and Sens. John Kerry and Richard Lugar, worry the money could be misdirected or fall prey to corruption due to a lack of accountability and oversight in the Pakistani government. But Pakistani Prime Minister Syed Yousaf Raza Gilani says the decision has been finalized and the aid will be funneled directly to Pakistani organizations and spent mostly on the country’s energy needs.

While Gilani claims his country’s ministries have installed sufficient mechanisms to ensure the money is spent wisely and that parliament will provide enough oversight, our data indicate a different reality in Pakistan. The country had weak scores in both executive and legislative accountability in our 2008 report. Global Integrity’s lead researcher found that in most cases, citizens cannot easily access records of legislative decision-making processes. As chief executive and leader of parliament, Gilani, is not required to fully disclose the reasons for his government’s policy decisions to the public, and in the past, there has been no clear distinction between official government and ruling party functions. This data suggests that the ministries controlling the spending of U.S. aid will very likely act as an extension of the ruling party with little transparency around decisions of where and how to dole out the American funds.

U.S. legislators are taking note of such accountability issues, and some are demanding external oversight mechanisms and inclusion of accountability measures in the legislation to accompany this sizable check. The aid could total $7.5 billion if approved for all five years, but there is no certainty that legislators will vote to appropriate the next round of funds next year if the aid is not spent appropriately.

While U.S. aid organizations argue they have better mechanisms in place to disburse the funds, they are not immune to their own transparency issues. In her 2001 book Collision and Collusion, author Janine Wedel criticizes USAID and other Western organizations for preferential awarding of contracts and inefficient spending of funds in Eastern Europe.

Whether the money is disbursed by Western aid organizations or the Pakistani government, there is no question that issues of oversight and accountability will need to be addressed as billions of dollars are at stake.