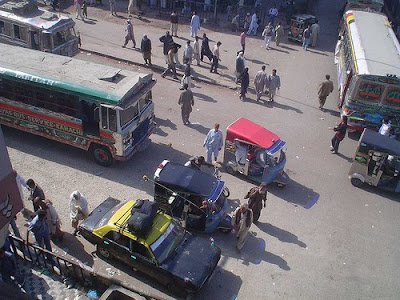 Often overlooked, Pakistan’s income tax collection could play a pivotal role in shaping the country’s economic and political development by empowering the central government and reducing its need for foreign aid.

A rare New York Times article on Pakistan– focusing on something other than the United States’ fight with the Taliban and Al Qaeda– turned towards perhaps a more relevant structural weakness that has continued to destabilize Pakistan over the decades – the country’s tax system. The Times called attention to a deep flaw in the nation’s tax regime, where inadequate tax collection has perpetuated a bizarre economy where the wealth of the elite piles mile high while the poor are hit hard by regressive sales taxes. The tax debate in Pakistan differs from the dialogue in the United States in that it does not concern fiscal stimulus versus austerity measures, but more fundamentally whether tax collection itself comes even close to something that looks like fair practice.

The nation’s reputation for tax evasion is widely known to work to the benefit of government officials and other elites. The Global Integrity Report: 2008 shows Pakistan’s performance on indicators related to tax collection to be outpaced by neighboring India. In fact, Pakistan’s scores on tax collection rival that of Sierra Leone. In comparing the Pakistan scorecard from 2006 to that of 2008, there has been little improvement as far as taxes and customs are concerned in Pakistan. In short, things are not well in Pakistan’s tax system.

The Global Integrity indicators scan for and reward the uniform enforcement and abiding of tax laws across different income groups. In Pakistan, whilst the tax collection agency receives regular funding from the government, tax officers are selected through competitive examinations conducted by the Federal Public Service Commission and the officers receive formal training for revenue collection, corruption is rampant within the agency. Workers often rely on illegal bribes for income. Pakistan’s scorecard for taxes and customs is pulled down further because, even though the Federal Bureau of Revenue oversees implementation of tax laws, tax officials are allegedly notorious for using their discretion when it comes to the application of the law. The Global Integrity indicators corroborate the analysis in the Times by noting that the poor, who are defenseless against tax collectors, are straddled with the lion’s share of the taxes. Poor implementation is at the heart of the country’s tax and customs problems.

Despite Pakistan’s repeated pleas for financial aid from the United States and the broader international community, the country has failed to look inward and reform what could be a credible base for tax collection. The Times piece highlights Cambridge Economist Akbar Zaidi’s argument that the country’s dependency on foreign aid has often times stunted internal reforms.(Global Integrity has found a related trend in our data, where highly aid-dependent countries such as Uganda and Bosnia and Herzegovina consistently struggle to fully implement their anti-corruption laws.) Disappointingly little progress was made to reform tax collection during President Musharraf’s regime, a time when the politicians and landlords who are regarded to benefit from the status quo, had been ousted from power.

Competing practices such as Zakat (or alms) may be hindering government tax collection. For instance the Tax Ordinance of Pakistan issued in 2001 allows for deductible allowances by the amount of Zakat that individuals pay. Zakat payments have served to shield the wealthy from the tax burden and have encouraged them to exploit what has become a grey zone area in order to evade taxes. However, Global Integrity’s scorecard suggests that Pakistan’s tax collection habits may be fairer practices than in other Muslim countries such as Indonesia and Egypt— although Indonesia has made rapid progress in the two years.

It is becoming clearer that any piece meal reform of Pakistan’s tax collection agency will have to push against the strong momentum that has been locked into the status quo. Any serious attempt will demand a complete restructuring of government agencies and their incentives for tax collection. Embarking on tax collection reform would be a significant step toward restoring the government’s credibility at home and overseas.