The Doomed Track For Reform 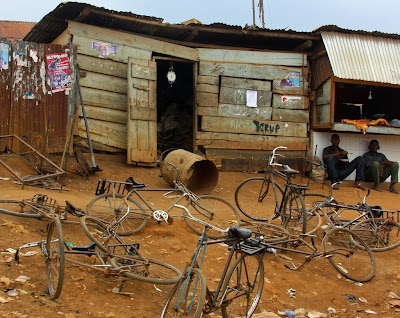 Ghana, a prominent model for development for the African continent and the site of President Barack Obama’s speech on governance promotion in Africa, has been eclipsed by a surprising contender. Contrary to popular expectation, Uganda scores consistently higher than Ghana overall on the Global Integrity Report. What gives? As highlighted in the Global Integrity Report: 2009 Key Findings, countries’ overall scores must not be interpreted at face value—for many aid dependant countries have forged a knack for demonstrating solid anti-corruption infrastructure, without the ability to actually support these structures in practice. Using recent data from Global Integrity, research associate Shahryar investigates this trend further.

In 2007, Global Integrity introduced the ‘implementation gap’ metric to capture the gap between a country’s anti-corruption laws “on the books” and the actual enforcement of those same laws. Not surprisingly, Uganda, has the dubious distinction of boasting the largest implementation gap of all countries covered in the Global Integrity Report. A key finding from 2009 helps explain that aid dependent countries like Uganda are often times adept at engineering laws and institutions to meet foreign donor requirements despite their failure to deliver for ordinary citizens.

Uganda has fine tuned its anti-corruption framework to look flawless in the eyes of any legal observer. Since the early nineties, key safeguard institutions such as the Inspectorate of Government have been created. Similarly, the Directorate of Public Prosecution has been given autonomy, and government accountability and transparency laws have been strengthened and expanded. Despite these legal reforms, the Uganda scorecards reveal serious issues when it comes to enforcement. In 2009, Uganda received a perfect score for anti-corruption law, however deplorable scores for law enforcement and the effectiveness of the anti-corruption agency. The scores for Ghana on the other hand were not as polarized: Ghana, though also host to a flawless anti-corruption legal framework, has much stronger law enforcement. Furthermore, although mandated by law, appointments to the law enforcement agency in Uganda are often not made on a strictly professional criteria, the government has been repeatedly criticized for factoring tribalism and nepotism while appointing lower level police officers. The recruitment of 350 cadet assistant superintendents of police (CASP) three years ago raised a lot of controversy; according to media reports 130 of the 350 recruited officers, allegedly came from the same region of western Uganda.

The breakdown of Uganda’s scorecard reveals a telling narrative. Uganda’s anti-corruption laws elicit the highest scores possible. Because the Integrity Indicators reflect a balance of de jure and de facto indicators, the precision of Uganda’s legal framework pulls up the county’s overall performance on the scorecards. In fact, out of all the countries evaluated by Global Integrity, Uganda has the best anti-corruption legal framework. Recent government administrations may be responsible for perceptively tweaking the law to portray an impeccable legal framework, however unreasonable or irrelevant it may be for Uganda. The token reforming zeal in Uganda is impractical at best.

The Gap in Africa

Implementation seems to be a problem for many countries in Africa, even for less directly aid-dependent nations, such as Rwanda. Closely trailing Uganda’s strategically engineered anti-corruption laws, Rwanda follows suit with a sizable implementation gap of twenty points on the 2009 Global Integrity Report. Despite minor hiccups, Rwanda’s legal framework appears to be in tact. However the Rwanda Reporter’s Notebook cautions that in practice, the legal framework and penalties in place serve as a poor deterrent to corruption. During a press conference taking place in August 2009 President Kagame was forced to admonish the national police and judiciary officials to ‘shift their efforts from “blaming and finger pointing” toward cleaning their tarnished image’ but little has changed in Rwanda. Corrupt practitioners feel secure about their ability to haggle their way through police officials and court rooms. Rwanda’s progress over the recent decade has been celebrated as a model for improving governance in Africa, however the anti-corruption framework, in many ways, is still lacking teeth.

Alongside Global Integrity’s objective indicators, corruption perceptions are also useful for exploring the gap between law and implementation. Transparency International tailors their assessment of governance and corruption trends to a perceptions based index. In 2007, TI observed aid dependent Malawi drop 28 places from 90 in 2004 to 118. Uganda, Rwanda and Malawi may have become masters at crafting and fine-tuning anti-corruption laws to impress the international donor community, however strong perceptions of rampant corruption corroborate a narrative of deplorable implementation of such laws in these countries. Correspondingly, Global Integrity’s reports for 2009 validate Transparency International’s findings and observe strong laws but poor practical implementation in all three countries.

Aid donors such as USAID and the Millennium Challenge Corporation (MCC) prioritize governance indicators in their aid awarding process and have picked up on this trend of weak implementation. As a result, USAID has shifted attention toward the actual implementation of governance reforms as opposed to mere consideration of the laws on paper. Carlos Santiso at SAIS Johns Hopkins denounces aid conditionality pertaining to governance reform, arguing instead that the World Bank should focus on an output oriented approach. Academics have long supported the opinion that moving laws around on paper sounds marginally related, but producing results on the ground is an entirely different ballgame. Now policy makers are joining the bandwagon prioritizing implementation.

Leaders in aid dependent countries need to launch a program of real reform that will yield tangible benefits for locals and not just one geared toward racking up a high score before foreign aid donors. Uganda’s government risks plundering the fate of future generations of Ugandan youth if they consistently fail to follow through on reform packages. Moreover, donors are beginning to see right through the scheme aimed at accumulating token reforms and may soon start to question the credibility of aid recipients that choose to embark on meaningless reform to fast track aid. Output-based measurement tools are key, but prioritization of reforms up front can save governments the headache of quickly passing too many laws, without the ability to support their roll-out.