Is Mashing up Public Data Illegal in Slovakia?

Earlier this week, we tweeted about charges brought against a fantastic non-governmental organization in the Slovak Republic, Fair Play Alliance. Fair Play Alliance is one of the most innovative NGOs we’ve come across when it comes to powerfully tapping public data online, especially around campaign finance and public procurement, to provide platforms for citizen engagement and government accountability. Their web tools for exploring the intersection of money, power, and special interests in Slovakia are fantastic.

Recently, a businesswoman in Slovakia decided she didn’t like the attention brought by one of Fair Play Alliance’s award-winning web tools, and filed a request for an injunction in court. Shockingly, at least to those of us on the outside, the court agreed that Fair Play Alliance should remove certain information related to the businesswoman’s (and her companies’) contracts with the government despite the fact that all of the raw data was drawn from public registries. Let’s steep in that fetid conclusion for a moment: the court’s ruling basically says that mashing up otherwise publicly available data in a way that reveals concentration of power in Slovakia is illegal.

Besides ranting on Twitter, I reached out directly to Zuzana Wienk, the terrific head of Fair Play Alliance, for two reasons: first, to make sure I wasn’t overreacting (I wasn’t); and second, to ask for her thoughts and perspective on this Kafkaesque turn of events.  Here’s what Zuzana wrote back to me yesterday (republished here with her permission and edited lightly for clarity, with emphasis added):

The ruling states: “The court orders [Fair Play Alliance] to restrain from publishing information about the claimant, [including her] name, surname and title, anywhere on the website www.znasichdani.sk in such a way that directly connects the claimant with the expression of financial value gained from [Slovak government] public procurement, and the order stands until the final ruling of the court in the claimant’s case.”

The ruling itself is very unclear. Our lawyers have appealed on the basis that it is impossible to apply because it does not specify what exactly we should do. The website generally does not contain any direct connection between a person’s name and any financial value gained by the person [personally] from public procurement.

Based on the preliminary injunction, we decided to remove from the website the total amount of the value of public contracts won by the companies where Mrs. Povazanova is or was active. Before she went to court, she sent us a letter requesting that her name be removed from our website completely, but we [simply couldn’t do that]. The site is a mash-up of two public registers (e.g. the information on the site draws from two freely available online databases): 1) a register of companies, and 2) an official journal of public procurement.  One of them – the register of companies – is tapped by our app in real time after users insert a name in a search box on our site. It is literally impossible for us to remove anyone’s name from our site, since that information is being drawn directly from an official register [that we do not maintain].

Moreover, it is against our principles to manipulate or censor such results. We stand behind our statement that the website contains enough clear information and warnings to prevent readers from inferring the value of any personal profit of an individual whose name is searched.

It is true that when the site was launched in Slovakia it caused a lot of turmoil because the Slovak public was not used to such [information]. The site contained enough warnings from the very start about the fact that people searched for might not be simply owners of companies but also managers, and that the financial value displayed was not personal *profit but was the value of contracts won by the companies where the person was active. Despite these warnings, we received many calls from politicians and influential business people, and even the media, misinterpreting the site’s results. So we changed the wording of the site very shortly after the launch, stressed our previous warnings, and added much more explanations and visual instructions.

Mrs. Povazanova claimed from the start that we were damaging her reputation by falsely identifying her as an entrepreneur when in fact she was only a [management official at the company], and that we made the site appear as if the financial value was her own personal profit. The site never did so. The site only identified entrepreneurs as the most interesting group we wanted to monitor and gave them a headline. There was a search box which said: “Who got paid from our taxes? / Check business people who get contracts from public procurement.” Later, this headline was changed to: “Who makes business with the state? Check personal connections to public tenders.” But from the site itself and the complexity of the information, it was always clear that [the information] was not only about entrepreneurs.

The court unfortunately has not given any arguments or reasons for its decision.

There are a number of disturbing elements of this saga, but two jump out at me as particularly worrying. The first is the unhelpful role of the courts in an increasing number of countries when it comes to promoting transparency and accountability around government. In some countries, this results from political pressure and corruption surrounding judges themselves. In others (such as the United States), the “rule of law” is increasingly morphing into the “rule of lawyers” where judges’ own ideological biases are rolling back essential transparency and anti-corruption safeguards. Regardless, the time has come to take the kid gloves off when it comes to demanding transparency and accountability from the courts themselves. It’s why we at Global Integrity have always focused as heavily on assessing corruption risks and transparency in the justice sector as we have on the executive and legislative branches. We hope others take up this call to action.

Second, the fact that such an internationally well-known and well-respected group like Fair Play Alliance could be partially silenced by an ill-defined court injunction sends a chilling effect across the NGO space. In less than two weeks, Zuzana and I, along with hundreds of senior government officials and many of the world’s leading transparency and anti-corruption NGOs, will be meeting in Washington, DC to publicly launch the Open Government Partnership, an innovative effort to stimulate a “race to the top” when it comes to open government reforms around the world. I’ll be chairing a working session on “energizing civic participation,” while Zuzana is speaking on a panel focused on “fighting corruption.” The point: Fair Play Alliance is the real deal and a professional outfit. How are groups like Fair Play Alliance , or Global Integrity for that matter, supposed to “energize civic participation” or “fight corruption” if we’re not allowed to mash up publicly available data in a way that is useable to the public?

I strongly encourage readers of this blog – whether in their personal or professional capacities – to speak out in support of Fair Play Alliance and the principles it stands for. The court’s actions in Slovakia must be put in their proper context, and this must not be allowed to become a precedent. I’ll even give you a hashtag: #freeznasichdani.

Otherwise, who will speak out when they finally come to censor us?

One comment on “Is Mashing up Public Data Illegal in Slovakia?” 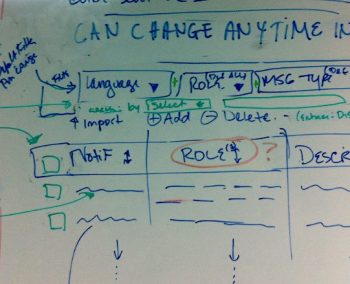 The Art of Designing Data Collection: The Indaba Experience

It Turns Out We Love Politics…

New Survey “Gets in the Minds” of Indian Entrepreneurial Class