A Working Definition of “Open Government”

(Editor's note: This was first posted over at Integrilicio.us.)

I’ve been spending a non-trivial amount of time lately watching and pondering the explosive uptake of the term “open government.” This probably isn’t too surprising given Global Integrity’s involvement in the nascent Open Government Partnership (OGP). As excited as I’ve been to witness the growth of OGP, the continued progress of the open data movement, and the emerging norms around citizen participation in government internationally, I’ve also been worrying that the longer we allow “open government” to mean any and everything to anyone, the risk increases that the term melts into a hollow nothingness of rhetoric.

My most immediate concern, which I’ve been chronicling of late over on this Tumblr, has been the conflation of “open data” with “open government,” an issue well-explored by Harlan Yu and David Robinson in this paper. I’ve also been publicly concerned about the apparent emphasis put on open data — seemingly at the expense of other open government-related priorities — by the current UK government, which is slated to take over the co-chairmanship of OGP shortly. (An excellent unpacking of those concerns can be found in this letter from leading UK NGOs to the government.)

But for all my griping, I’ve yet to put my money where my mouth is and offer up my own definition of what “open government” means. It’s time to fix that.

What follows is, at best, a rough working definition of open government that I hope spurs debate and conversation. This is certainly not 100% correct, all-encompassing, or definitive. Nor is it rocket science: this tracks fairly closely with others’ thinking, and I suspect it’s not too far outside of anyone’s mainstream definition (including the Open Government Declaration of September 2011).

At its core, “open government” to me means three things:

It goes without saying that the world does not fit neatly into this clean paradigm. Electoral processes are as much a form of accountability as a form of engagement, and the distinction between information transparency and engagement blurs quickly when we talk about something like open311. But hopefully the general construct holds some water.

Rather than dive any deeper into this, I’ll stop here to allow for others to correct, add to, or tear this apart. How would you define open government?

One comment on “A Working Definition of “Open Government””

Liberia: A Journalist, a Blackboard, Some Chalk and Open Government 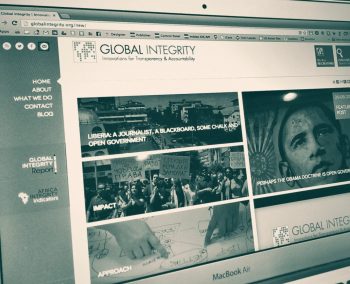 Highlights of the New www.globalintegrity.org