Throwing the transparency baby out with the development bathwater 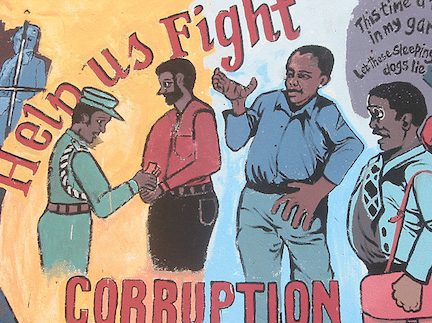 In recent weeks, a number of leading voices within the international development movement – including the billionaire philanthropist Bill Gates as well as development economist Chris Blattman and tech-for-development expert Charles Kenny – have come out arguing that corruption and governance efforts in developing countries should be de-prioritized relative to other challenges in health, education, or infrastructure. Their basic argument is that while yes, corruption is ugly, it’s simply another tax in an economic sense and while annoying and inefficient, can be tolerated while we work to improve service delivery to the poor.

The reality is more complicated and the policy implications precisely the opposite: corruption’s “long tail” in fact undermines the very same development objectives that Gates, Blattman, and Kenny are advocating for. Put another way, allowing corruption to persist at more than marginal levels in countries is the surest way to cut the legs out from under any long-term development initiative. Greater transparency and accountability from governments also happens to be exactly what people themselves in developing countries are calling for.

The Reality of Development and Corruption

Where should governance and anti-corruption rank on your list of development must-dos? Let’s take a quick look at the evidence.

People (including in developing countries) want transparency and good governance. More than a million respondents to a recent United Nations poll in more than 190 countries identified “an honest and responsive government” as their fourth most important development priority, above “clean water and sanitation,” “affordable and nutritious food,” and “better transport and roads.” This held true even in the countries with the lowest human development indicators. Should we be forcing clean water down the throats of the poor when they’re asking for something else? These results raise thorny questions.

Improved governance correlates with economic growth. While the data is still nowhere where it needs to be (we’ll come to that), it’s undeniable that over time and across countries, better governance is connected to better growth prospects for a majority of countries. Anti-corruption isn’t a luxury for the rich or a “nice to have” feature of modern societies; rather, it appears to be an important cornerstone of development.

(To their credit, the Gates Foundation is putting some serious money into a five-year research program designed to prove (or debunk) the link that governance and transparency have to service delivery interventions. Watch this space.)

Poor governance often leads to poor political outcomes, setting the stage for conflict that can destroy decades of development work. To isolate development from power and politics is to ignore the realities that aid (even the most altruistic and well-intentioned assistance) always generates winners and losers. Too often in many countries, aid serves to prop up unpopular, undemocratic regimes with weak domestic legitimacy. Witness Iraq and Afghanistan in the present day, or North Africa before the Arab Spring. These stories don’t tend to end very well from a development perspective.

Encouraging (even tacitly) government opacity in the name of service delivery – a “benign dictatorship” approach to development, as it were – simply doesn’t wash in the contemporary age with most publics. Here’s a creepily interesting chart based on Global Integrity anti-corruption data showing just how far behind the rest of the world Middle Eastern and North African countries were with respect to freedom of information before the Arab Spring (see chart below).

At some point, most societies have a breaking point where illegitimate and unaccountable government, regardless of its record in collecting the trash on time, is simply intolerable for the majority of its citizens. Effective development is development with dignity, and increased transparency goes a long way towards legitimizing aid efforts.

Beyond a Zero Sum Game

Rather than sacrifice anti-corruption and transparency efforts at the altar of development, a better approach is to embrace transparency’s “force multiplier” effect as a development goal in and of itself, much as we do now with education. After all, no one has ever died directly from being stupid, but we’ve come to appreciate the catalytic role that education plays in the development causal chain. The same goes for transparency and anti-corruption.

But a first order of business is to improve the data we have available to better demonstrate these linkages. The Gates-funded research mentioned above is one example, but huge work remains to build the evidence base; there’s simply no data available in many countries or on many dimensions of governance and transparency to answer core questions around impact and return on investment. A number of leading civil society organizations that already generate some of this data are exploring ways of better collaborating to fill the gaps, but much more needs to be done, including bolstering national statistical offices inside of governments in the global South.

We need this new data to help answer the data driven skeptics in the development field. But until we have it, let’s not rush to throw the transparency baby out with the development bathwater.

Transparency International Chapter in Bosnia-Herzegovina Forced to Shut Down

Liberia: A Journalist, a Blackboard, Some Chalk and Open Government