What Would Human-Centric Design for Knowledge Sharing Between Governments Look Like? 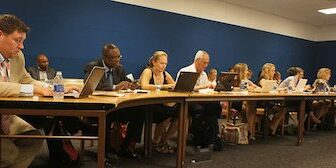 In the open government and transparency space, there’s a never-ending thirst for “knowledge sharing” – particularly between governments. If only smart government reformers in County X knew what great stuff their counterparts in Country Y had come up with, goes the theory, we could quickly scale up successful interventions and “fix” government processes quickly and efficiently. Thus were a thousand “marketplace” and “portal” ships launched, all in the name of cataloguing, tagging, and making various bits of wisdom for opening up government searchable (feel free to replace “open government” with your vertical of choice).

Here at Global Integrity we’ve bought into the logic model for many years. We’ve served on advisory committees to various online portals designed to provide government experts with knowledge at their finger tips. In recent years we tried to conceptualize and run the now-defunct Open Government Partnership Networking Mechanism, designed to link open government reformers with counterparts in civil society as well as the public and private sectors to share lessons learned and insights. In that experience, we learned the hard way what most (if not all) of these efforts had previously come to appreciate: they often don’t work. No one likes to talk much about this (after all, who doesn’t love south-to-south knowledge sharing as a mantra), but it’s time we unpacked why knowledge sharing between governments might be so especially hard and what we might do to make it easier.

My own hypothesis for many of these struggles is that they fail to take into account how the human beings inside of government operate, day to day, and what their incentives, fears, and motivations are. Instead, we operate as a hammer (a web portal, a marketplace of ideas) in search of a nail to smash rather than asking, “do you really need a hammer? Maybe a screwdriver instead?”

Put another way, we collectively fail to embrace at least the basics of human-centric design and instead foist top-down solutions on beneficiaries who’ve never asked for our wisdom, never mind enunciated their actual problems. Little wonder that so many knowledge platforms go unused with little discernible return on investment.

So what do we know about government reformers and what makes them tick that might inform better designed knowledge sharing interventions? Based on my own experience in government as well as Global Integrity’s decade-plus experience assessing and engaging with hundreds of governments around the world, here’s my short list:

Towards a Human-Centric Design of Knowledge Sharing

Are there things we could do to better to design knowledge sharing between governments based on those (admittedly rudimentary) insights? I think so.

What else am I leaving out? And what else should we be focused on the next time we embark on another government-to-government knowledge sharing expedition? Sound off in the comments below.