Welcoming new colleagues, on the team and on the board! 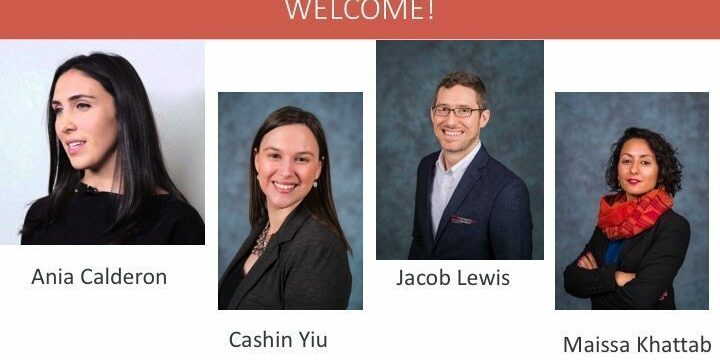 Three new faces around the office, and one new board member have us particularly excited for all we’ll be getting done in the coming months! We know that our passionate, skilled team members are what make us tick, and we now have a broader set of experiences and capabilities to sustain and further improve on our work.

Ania Calderon joined the Global Integrity board in late 2016, and we couldn’t be more excited. She brings a wealth of expertise and experience in the sector, and we look forward to working closely with her in the coming years.

Ania has recently taken on the role of Executive Director at the Open Data Charter. For the past three years, Ania led the National Open Data Policy in Mexico, delivering a key presidential mandate. She established capacity building programs across more than 200 public institutions, developed tools and platforms to enable the release of standardized data, built channels to increase the ability of citizens to inform data release and started a national open data network of over 40 cities working to improve service delivery.

Ania created programs with multiple sectors to increase the use of data to reduce maternal mortality and increase financial inclusion in Mexico’s largest social development program, enhance resilience against natural disasters and launched a Datalab fellowship program to improve evidence based policymaking. She worked to strengthen open data commitments globally, such as with the G20, Anti-corruption Summit and multiple regional and bilateral declarations.

This work helped position Mexico as an open data leader in Latin America and New Challenger, according to the Open Data Barometer. Ania holds a Masters Degree in Public Administration from Columbia University and has prior experience as founder and director of a non-profit organization that focused on promoting citizen engagement in shaping Mexico City’s public agenda.

Cashin Yiu joined us as Global Integrity’s first Operations Associate in December, and put her capabilities to use straightaway across various organizational priorities. Cashin will be directly assisting a number of our key research initiatives, and will focus on providing effective support services across the organization. She’ll be intricately involved in the management and improvement of our financial, human resources, monitoring, reporting, and communication systems.

Prior to joining our team, Cashin worked in a variety of roles at Community Action Partnership, the membership organization for America’s 1000+ Community Action Agencies, working in 96% of America’s counties to fight poverty with local solutions. In particular, she worked on the Training and Technical Assistance team supporting programs establishing Organizational Standards and focusing on risk mitigation. Cashin earned a Bachelor’s degree from the University of Georgia in International Affairs with concentrations in comparative politics and community.

Jacob Lewis joined the Global Integrity research team in September 2016 to help manage the Africa Integrity Indicators project. In addition to his work with Global Integrity, Jacob conducts research and teaches at the University of Maryland, where he is a doctoral candidate in political science. Jacob’s research focuses on issues of corruption and contentious politics and violence in Sub-Saharan Africa. He teaches courses in international development and conflict.

Jacob’s past work includes managing USAID-funded democracy and governance programs throughout Central and East Africa, including the Democratic Republic of Congo, Chad, Kenya, and Tanzania. Additionally, Jacob has worked in Afghanistan. He has held visiting researcher positions at the National Consortium for the Study of Terrorism and Uppsala University. He holds a BA in Psychology and an MA in International Affairs, and has lived in France, Sweden, and Denmark.

Maissa Khattab joined the Global Integrity research team in November 2016 to help manage the Africa Integrity Indicators project. Prior to her arrival in Washington DC, she was consulting for the UN World Food Programme in Sudan, and the Institute for Integrated Transitions working on Tunisia’s transition post-Arab Spring. While living in Brussels, she worked for five years at the International Crisis Group’s headquarters in Brussels. She completed an MA in International Development Studies at the George Washington University where she also consulted for Plan International in Washington DC and Cairo, Egypt. She holds a second MA in Translation in the field of International Relations and a BA in Spanish Philology, and has also lived in Rwanda, the Central African Republic, Gabon and Bosnia-Herzegovina.

ED Transition | Renewal and Rewilding: My Departure and Our Connections
June 29, 2022

Board of Directors Recruitment
June 21, 2021

What’s in a name? Reflections on integrity, relationships and systems
February 2, 2021

A Time to Prioritize and Commit: Introducing Our New Leads for Listening and Learning, and Communications
September 11, 2020