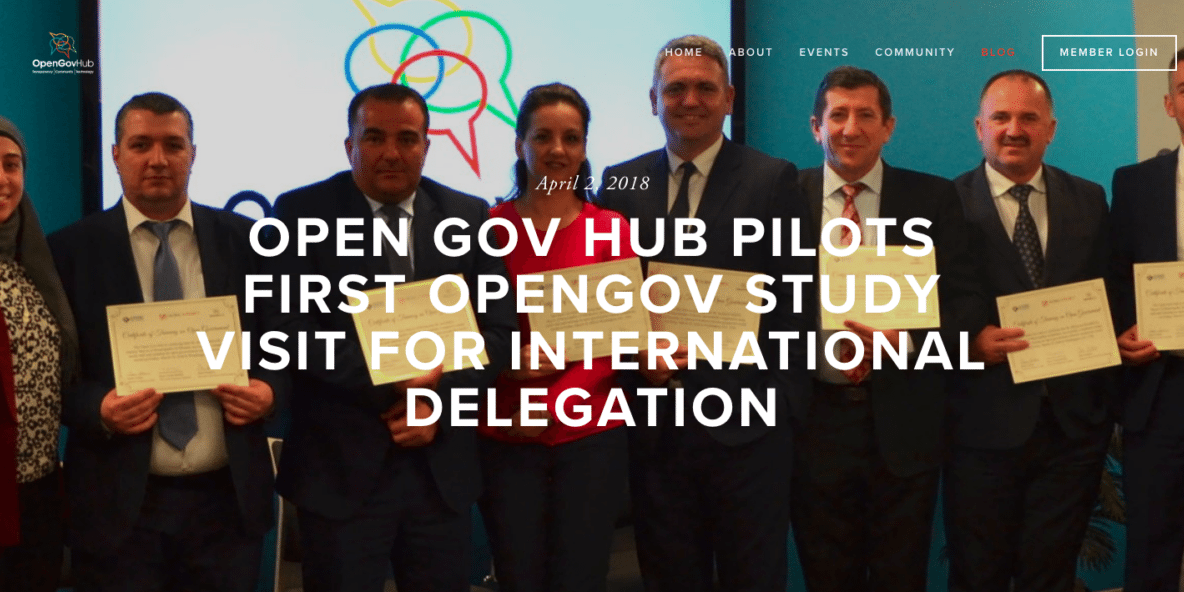 Open Gov Hub piloted a new study visit for mayors across Albania to learn how to make their government more open, accountable, and responsive to their citizens. The goals of this program were to facilitate peer learning and collaborations between the mayors, DC area municipalities, and global leaders in the open gov field. The Albanian Mayors were also the first cohort to participate in and complete a new, signature Introduction to Open Government (“OpenGov 101”) training the Open Gov Hub has recently developed.

This rich study visit from March 21st-25th, 2018 provided an immense number of opportunities for the delegation to participate in dialogue and exchange with a wide variety of US and international organizations. Their program was filled with exchanging ideas, building skills, and learning from diverse counterparts. The mayors from the 13 municipalities across Albania openly shared about their challenges and eagerly listened to ideas and suggestions from all those they met. The opportunity to also talk openly about this issues amongst themselves also proved beneficial to the mayors to see their commonalities in challenges.

One outcome from such conversations was the Albanian Association of Municipalities. (which co-organized this program with the Open Gov Hub) committing to helping the mayors speak with one, stronger collective voice in deliberations about decentralization with the Albanian national government as well as the US Embassy in Albania and other key stakeholders.

Another highly productive aspect of this program was the interaction with the United States government. In fact, this meeting was the first time ever in which US State Department representatives directly met with a group of Albanian mayors, to explore how to improve bilateral cooperation.

The mayors also held meetings with representatives from the following organizations who are leaders in the development, open government and global diplomacy:
–  Feedback Labs
–  Development Gateway
–  National Democratic Institute
–  International Republican Institute
–  Partnership for Transparency
–  Embassy of the Republic of Kosovo

Program Goal #2: Connect mayors to business leaders and others from the Albanian diaspora in the US to help attract diaspora investment and partnerships to support their municipal economic development projects.

While in DC, the mayors explored partnerships with the Albanian diaspora as well to build bridges of cooperation. This included Albanian-American business people who expressed their interest in economically investing back home; however their number one concern in doing so was the fear  of their funds being wasted through corruption. This provided an additional incentive for the mayors to continue to tackle corruption in their own municipalities back home, due, in part, to the greater opportunity for investments.

The visit also included time spent at the Albanian Embassy with Albanian Ambassador to the US Floreta Faber and her team.

Program Goal #3: Help mayors learn from Washington, D.C. and neighboring cities/municipalities in Virginia and Maryland about how they offer public services efficiently and effectively to their communities, transparency and accountability practices, and explore international cooperation.

Some highlights of these local government meeting included a visit to their counterparts in Arlington County government. They head from Arlington’s Head of Transportation about Arlington’s evolution over the last 50 years from a typical post-WWII American suburban city to a leading model of smart growth that integrates multiple transportation modes for its citizens, reducing traffic and reliance on cars, and increasing quality of life and property values for residents, which has translated into a growing population for Arlington (which also means a growing tax base).

Program Goal #4: Pilot a new Introduction to Open Government training that the Open Gov Hub has just developed,  based on the many visiting international delegations it has hosted for brief visits over the last few years.

Open Gov Hub conducted a training for the mayors in global open government good practices and offered a variety of case studies to inspire, kickstart and inform their own open government reforms (from citizen monitoring, to ensuring the delivery of textbooks in the Philippines, to open data portals used to help stimulate economic activity and entrepreneurship, and more). To complete the training, the mayors created their own Open Government Action Plans, setting reform priorities over the next 1 month, 6 months, and 1 year, with concrete steps for implementation.

Overall, this study visit established connections with a wide variety of partners for ongoing collaboration relating to future study visits, virtual exchanges, and knowledge sharing for this group of mayors who are committed to make opengov reforms locally.

Open Gov Hub plans to replicate this study visit for other international delegations. If you would like to get in touch with us about participating or helping organize such a visit, please do so at [email protected]