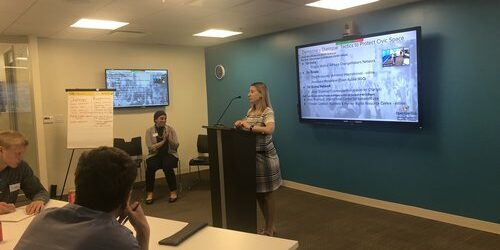 On July 22, we hosted a dialogue on Tactics to Protect Civic Space in Russia, India, the U.S., and Beyond as a part of Open Gov Hub’s Defending Democracy series. Six speakers highlighted different aspects of the rising accost on democratic freedoms and institutions, and explored ways to shield rights and values from repression with an actively participating audience. The concerning anti-democratic tactics discussed were smear campaigns, digital threats, and physical violence against activists. The goal of this event was to share emerging lessons from India and Russia, and apply them to the American context of backsliding democracy.

The opening speaker, Pragya Mishra, Atlas Corps Fellow, shared insights on what is happening in India. The right-wing Modi government and the rise of Hindu nationalism – dominant castes exerting power, akin to white supremacy in the U.S. – are infringing upon the viability of the world’s largest democracy with inflicting violence, curtailing freedom of speech, and smear campaigns.

The 3 main lessons from India for the U.S. are:

1.     Use the courts: Challenging unfair laws and actions through the judicial process, with the support of lawyers’ collective who defend democratic rights, can be an effective tool. The respect for the judiciary is high in both India and U.S. alike, so court decisions are generally upheld by other institutions and observed by the public. This contests Modi’s authoritarian grip on the government in India. Likewise, court action can continue to curb Trump’s harmful policies targeting immigrants and refugees.

2.     Combat fake news: The viral spread of misinformation, fueled by exclusion and anger, has been catalyzing repression and mob violence. It is imperative to use independent, alternative channels of information to correct these wrongs through effective platforms, including social media channels. This can help to combat smear campaigns and responsibly encourage the freedom of speech and the press.

3.     Change the rhetoric of rights: Moving from the competing language of “equal rights” to encouraging co-living freely with compassion is a path to a more inclusive society. In India and the U.S., minority groups are disproportionately experiencing threats against their presence in the civic space, facing backlash from the ruling majority. Teaching critical thinking and empathy to young people as life skills can help change the mentality around rights.

The next two speakers, Oleg Kozlovsky of Amnesty International and Anastasia Moskaleva of Open Russia and Open Gov Hub — as well as Atlas Corps Fellow — analyzed how pro-democratic activists are being challenged by governmental institutions and quasi non-state actors alike, all aligned with Putin.

The 3 main lessons from Russia for the U.S. are:

1. Expose violence against activists: The Russian opposition faces violent repercussions, including beatings during protests by both police (funded by Putin to protect the government rather than citizens) and quasi non-state actors (run by oligarchs in alliance with Putin). Unlike in India, the courts in Russia are not responsive, but the cost of violence goes up with exposure. This is a lesson that the United States is already attuned to — with exposing police brutality against black people — albeit with mixed effects for justice in both cases.

2. Diffuse slander with real reports: State-run media and troll factories fueled by immense wealth are difficult to combat, but there are tools to strengthen and unite activists by combating the propaganda with authentic citizen-driven reporting on the ground. Shedding light on deceptive and manipulative tactics employed by Putin and Trump alike are key to disempower public misinformation.

3. Demand accountability and give support: The support from human rights organizations is helpful, as is overcoming the post-Soviet mentality of fear. Some helpful tools that pro-opposition organizations can offer activists are trainings, investigations, hotlines for legal support, and even direct participation in elections to raise awareness about democratic dysfunction.

Overall, there are multiple limitations imposed on civil society across the globe, which is increasingly seen as an external threat by governments in power — namely parties with nationalist sentiments and authoritarian regimes. Swept by the wave of right-wing politics, the United States is not immune to it. Even established democracies must ask: we are open, but for whom?

Three additional contributors – Noel Dickover of Innovation for Change, Nick Robinson of International Center for Nonprofit Law, and Christen Dobson of Business & Human Rights Resource Centre – explored different issues and tactics in the struggle for open societies across the world, with lessons applied to American democracy.

The 3 main lessons from the global community for the U.S. are:

1. Outsmart restrictive laws: Whether they are laws reducing space or restricting funding, there are ways for nonprofits to exchange information, resources, and skills – for example, trading grant-writing for accounting – and thus boosting nonprofit sustainability.

2. Do not demonize “the other” in the time of protest: We live in contentious times, and it can be difficult to keep polarization at bay. It is crucial to stay grounded in the midst of division and keep the respect for all humanity at the center of all political action, even if it is not reciprocated by the opposing side.

3. Empower the powerless: Racial minorities, indigenous groups, LGBTQI people, women, and laborers are frequently at the forefront of repression. They are often disproportionately disenfranchised and discriminated against, which frequently gets exacerbated when they stand up for their rights. It is particularly important to give them a voice in the overall fight in the defense of democracy.

While the policy contexts and applicable lessons vary, staying vigilant and mindfully active is key. The vitality and vibrancy of every democracy largely depends on citizen engagement in social and political spheres. Defending democratic institutions and values requires collective action to incessantly push progress forward against the receding waves of repression. The American people have the associational space to organize against those who are trying to narrow the openness of civic space across the United States. This is a critical time to foster a viable, inclusive democracy.