Africa Integrity Indicators: GI’s Last Round of Data and Passing the Torch 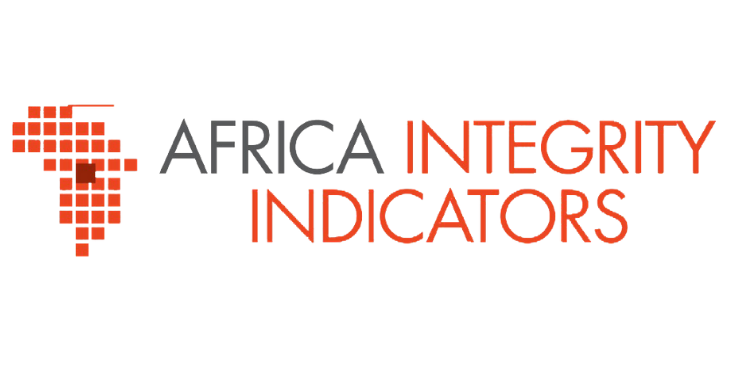 After nine months of research, the provisional data for the 10th round of the Africa Integrity Indicators (AII) is ready for feedback. As with previous rounds, we make the provisional data publicly available so that everyone can provide feedback on the research before the final data is published in July.

The data, covering Sept 2020 – Sept 2021, can be viewed and downloaded in both .xls and .csv formats and has been transformed into an interactive data visualization on our data page. In addition to letting us know if there are any inaccuracies, we would also love to hear two things from you – how you use the data and how we can make it more valuable for you. Email comments to [email protected] or fill out this brief feedback form by May 31st, 2022.

After 10 years of data collection led by Global Integrity, the AII project is being transitioned to the Kenya-based African Institute for Development Policy (AFIDEP), who will take over the collection and dissemination of the AII data for future rounds. We have worked closely with our AFIDEP colleagues over the course of the last year on the data collection for round 10, training them to take on the project starting with round 11 and ensuring that they can continue to deliver the same high-quality data in the future. Global Integrity will remain on as an advisor to the project through the end of the next round to ensure a smooth transition.

We are very excited to see what AFIDEP does with the AII project and how they will use the data to effect change on the continent!

What are the Africa Integrity Indicators?

AII is a research project that focuses on African governance in practice, examining how policies are implemented to support governments, citizens and civil society. It assesses different aspects of transparency, accountability and social development across specific indicators that are collected yearly. Indicators follow a strict methodology. Our data is used by concerned citizens, journalists, researchers and others interested in African public governance. Several institutions also integrate these datasets into their work, such as the The Ibrahim Index of African Governance and the World Bank’s Worldwide Governance Indicators (WGI). Through the WGI, our data also provides the Millennium Challenge Corporation with key information needed to inform its decisions about country eligibility for their compacts.

As the world continues to deal with the COVID-19 pandemic, we saw some improvement across Africa on our indicator measuring health campaigns and responses to epidemics. While it has consistently been one of our highest-scoring indicators across all years, we saw the cumulative score across all countries for this indicator decrease slightly in the previous round, which captured the first six months of the pandemic. This round, measuring the period from September 2020 – September 2021, we’ve seen a significant increase in the cumulative score for this indicator as countries across the continent have had time to implement their pandemic responses and begin rolling out vaccines. 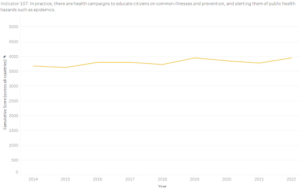 Continuing the general upward trend we’ve seen since we began collecting data, women’s representation in cabinets and legislatures has increased since the previous round, while women’s representation on national-level courts remained the same. As more women become involved in politics, and as countries continue to take gender into consideration when forming governments and nominating judges, we expect this trend to continue. 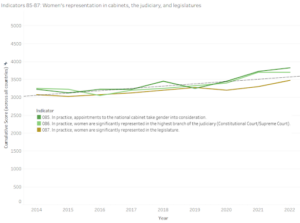 Unfortunately, another trend we see reflected in the new round of data is a continued decline of press and media freedoms. Though the cumulative score across all countries for our indicator measuring government censorship of the press did increase very slightly, this was offset by a steeper decrease in the cumulative score for our indicator measuring the censorship of citizen-created content online. As pictured in the graph below, both indicators have measured steady declines in freedom of the press and freedom of speech since the project began. 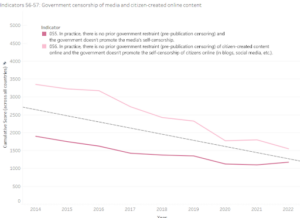 Our 5 top performing countries this year, in order, were South Africa, Seychelles, Mauritius, Tunisia, and Namibia, which overtook Cabo Verde to gain a spot in the top 5. While Tunisia remains among the top countries in our index in terms of cumulative scores across all indicators, it has fallen from 3rd to 4th, and has experienced one of the largest declines this round as compared to the previous round

Eritrea, Equatorial Guinea, and Somalia remain the three worst-performing countries in our index this round, though Somalia has gained some ground overall.

Compared to last year, a number of countries have improved their performance across several indicators. The sharpest increases in cumulative scores compared to the previous round came from Mali (+275 points), Malawi (+225 points), and Morocco (+200 points). Morocco, in particular, has consistently improved its overall performance since the start of the project, while Mali and Malawi seem to be reversing their declining performance over the last 5 rounds.

Mali’s results are interesting because, despite a widely condemned coup d’etat, the country did improve its performance on several indicators, namely related to transparency, freedom of assembly, and women’s representation. However, since the research period ended in September 2021, the decision to suspend elections is not reflected in the overall score. 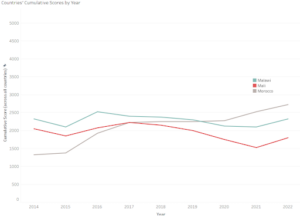 Though it is still a top-performing country, Tunisia has suffered a significant decline compared to last year, primarily due to the sudden closure of the headquarters of the anti-corruption body (INLUCC) and the expulsion of its staff, ending a streak of improvement over the previous eight rounds.

Both Ghana and Cabo Verde have continued steady declines in overall performance since AII6 and AII7, respectively. In Ghana, a worsening of the environment for NGOs as well as a lack of recent statistics on employment and poverty have driven this year’s decline, while in Cabo Verde, the lower scores are partly due to increased executive influence over institutions. 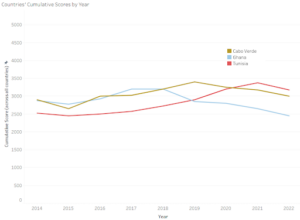 Send us your Feedback!

We encourage you to send us your feedback via email to [email protected] or through the feedback form by May 31st. The data can be viewed and downloaded (in both .xls and .csv formats) or via interactive data visualizations on the data page.

Africa Integrity Indicators: New data, a new round, and transitioning to Africa!
July 6, 2020

Côte d’Ivoire and COVID-19: how a political crisis can jeopardize an effective pandemic response
May 28, 2020