In Somalia, “Paying Just to Be Alive” 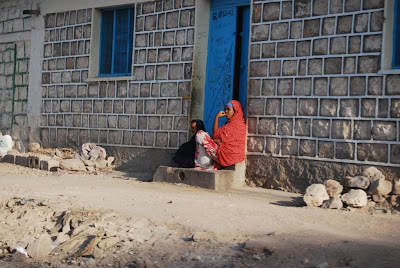 In a preview of the Global Integrity Report: 2008 to be released on Feb. 18th, Abdurrahman Warsameh reports from Somalia that citizens perceive government as little more than border control, where interactions with government officials are confined to the airports, seaports and checkpoints. The only Somalis that attract government attention are journalists, who are under intense pressure as government agencies attempt to cover-up grand corruption.

Somalia landed at the bottom of the list on Transparency International’s annual Corruption Perceptions Index for both 2007 and 2008, based on dismal public opinion poll results. Somalis see corruption as an inevitable, everyday part of government. After all, they experience corruption in almost every sphere of their lives.

For nearly two decades, functioning government institutions that provide services to citizens in this war-torn Horn of Africa country have been absent. This is particularly true in the Somali capital of Mogadishu, where government forces (of the Transitional Federal Government or TFG) and the Ethiopian troops backing them have been in partial control since ousting an Islamist administration in December 2006. In Somaliland, the self-declared independent republic in the north, the situation is better, with a largely credible government trying to institutionalize a stable political system and working institutions.

Residents in the capital are in contact with government officials and security forces only at certain areas and times. They encounter government officials at Mogadishu’s entry points such as the seaport and airport when traveling or importing much-needed goods or exporting the few commodities, such as livestock and illegal charcoal, that the war-wracked country has to offer to the outside world. They can also encounter government traffic police and military at checkpoints, as well as tax collectors in markets in government-controlled areas.

Airport travelers have to pay unknown “facilitation fees” to countless internal security personnel. Some travelers must pay as much as 28,450 Somali shillings (US$20) when leaving the country. When returning to Somalia, individuals could face false charges ranging from links to terrorism to importation of banned substances.

“Paying just to be alive”

Ali Isse, a local businessman, had firsthand experience of being detained at Mogadishu’s Adden Adde International Airport while coming back from a business trip to the United Arab Emirates.

“The security at the airport took me to a room and questioned me for an offense I did not understand. They threatened me with arrest if I did not pay them 1,427,000 Somali shillings (US$1,000), but I refused to pay because I knew I was innocent,” Isse said.

Isse was taken to a secret prison in Mogadishu’s notorious presidential palace where he was held in solitary confinement for a month and allowed to speak to no one. After being repeatedly interrogated by anti-terrorism squads, he was finally released after his relatives paid a bribe of 2,854,000 Somali shillings (US$2,000).

“They paid the money without my consent because they knew I might never get any justice,” Isse said. “Here, we have to pay just to be alive.”

At the seaport, merchants importing goods into Somalia say that even after they pay the regular tax, which they maintain is already prohibitively excessive, importers and exporters are required by port officials to pay “facilitation fees”. This means they must pay bribes to be allowed to take their imported goods out of the port or face indefinite delays that involve undue inspections for illegal weapons, explosives or drugs.

“We have to cooperate or else we lose everything we have in the stores of the port or in containers,” Yusuf Musse, a rice importer, said. “If we dare report this to higher officials we would wind up fighting for our lives.”

Motorists, particularly bus drivers on Mogadishu’s potholed streets, face daily demands on their meager incomes from government police, military forces, and clan militias. Bus drivers regularly have to pay a sum of money every time they use the few drivable streets in the city.

The street money is locally known as leejo, a corrupt Italian word meaning “legal”. But authorities say the action is far from legal. They deny knowing that such money is being taken from bus drivers. They claim their forces are disciplined and do not extort money from residents.

Yasin Ahmed, a bus driver in Mogadishu, says that drivers do not dare challenge the soldiers and others they encounter at the capital’s numerous checkpoints. Many bus drivers have been shot dead after merely trying to negotiate the amount of the bribe, an occurrence regularly and widely reported in Mogadishu local media.

“All of us bus drivers are required to pay 15,000 Somali shillings (US$0.50) each and every time we use the street. We pay while driving from one part of the city to the other,” Ahmed said. “At the end of the day, we are left with a very small income from our long day’s work.”

Local media in southern Somalia do not have access to the information that could potentially incriminate government officials who are involved in corruption and graft. What information there is comes in the form of political accusations by rival politicians against each other. It is not necessarily followed by formal investigations. A culture of secrecy surrounds everything the government does. Any news that does come from the government is often spin, or consists of general allegations of corruption against a government official who has fallen out of favor with the Somali TFG President Abdullahi Yusuf Ahmed.

On Oct. 3, 2007, Supreme Court Chief Justice Yusuf Ali Harun was arrested by presidential guards who locked him up in an unknown location after the president publicly accused him of corruption.

Somalia’s attorney general, Abdullahi Dahir Barre, a close ally of the president, ordered Harun’s arrest. The president’s allies in the cabinet voted to remove Harun from his constitutional post on charges of graft, but these allegations have never been substantiated. Harun was released after months in detention.

Lawmakers in Somalia’s national parliament are bribed to vote for a particular issue. Reports abound of huge sums of money changing hands in the Somali parliament when an important motion is being debated or is about to be voted on.

No corruption scandal has ever been exposed by the local media, which are vibrant but handicapped by the threat of persecution, arbitrary arrests and the nonexistence of a legal right to access information in Somalia’s legal system. And no one has been formally charged with, or arrested for, corruption in Somalia since the current transitional government was formed in 2004.

It is not just that the country’s integrity level is not up to international standards which make life in Somalia so difficult. The ability of local media to expose wrongdoing by officials from top to bottom is severely curtailed with arbitrary arrests being a part of everyday life for journalists, particularly those in the south and central parts of the country.

A number of journalists have been killed, tortured and arrested for unexplained reasons. Since January 2007, nearly 10 have been killed and nearly 50 others arrested, though most of them were later released.

According to a statement by the National Union of Somali Journalists, local radio stations have been repeatedly closed at will by Somali government security forces after being accused of disseminating “terrorist” propaganda.

Despite the approval of a media law that generally grants freedom of speech by the national parliament, the media’s freedom to report on even the simple workings of government, let alone corruption, has been severely curtailed.

The former Somali Prime Minister Ali Mohamed Ghedi announced his resignation before parliament in the southern Somali town of Baidoa on Oct. 29, 2007, after allegations of embezzlement of state funds. Ghedi has never been formally charged with corruption and has remained a member of the transitional Somali parliament ever since.

In July this year, current Somali Prime Minister Nur Hassan Hussein sacked the powerful mayor of Mogadishu, Mohamed Omar Habeeb for, among other things, misappropriating state funds. But Somalia’s president, with whom Habeeb has been a close ally, revoked the premier’s decision and reinstated the mayor. This action ignited waves of resignations of the Somali president’s supporters within Hussein’s cabinet. Accusations of graft were traded on both sides of the two camps.

It is well-known that there has been corruption in even the highest levels of the Somali government since it was formed in 2004 in the Kenyan capital of Nairobi where the U.N. and IGAD-sponsored protracted peace talks. But it has often seemed that there was only a gentlemen’s agreement among Somali government officials that no one would be held responsible for corruption beyond generalized verbal accusations of wrongdoing. No one would ever have to face justice.