In the Global Integrity Report: 2008, our team “followed the money” to create our first ever Grand Corruption Watch List. This list identifies 13 countries with the lowest scores for regulating the flow of money through government. As national bailout programs are developing world-wide, these are the countries to keep a close eye on for disappearing funds at the highest levels of government.

How did we create the Grand Corruption Watch List? 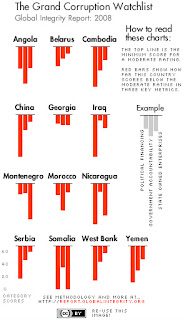 (For details of the Global Integrity approach, see methodology , download XLS data or dig into the scorecards.)

In each of the Watch List nations, the lack of government accountability frameworks is emphasized as a key challenge for fiscal transparency. Detailed scorecards from all 13 nations can be found in the Global Integrity Report, but here are a few examples of troubled systems:

• In Angola, conflicts of interest and accountability regulations are completely absent from the executive, legislature, and judicial branches, while “the budget is largely prepared in secrecy by the Ministry of Finance.” These conflicts of interest problems also extend to state-owned enterprises, where “government ministers and other high-level officials commonly and openly own interests in companies regulated by their respective ministries.”

• Global Integrity’s lead researcher summarized the political reality in Belarus by noting, “there is no ruling political party. In Belarus, we have A. Lukashenko and his authoritarian state.” Stemming from this, there is little accountability at the executive, legislative or judicial branches, as can be seen in the inaccessibility of government records and candidates’ willful ignoring of political financing regulations.

• Cambodia suffers from a range of governance and anti-corruption challenges, including vote-buying and political financing scandals to privatizations that have tended to favor a small group of wealthy elites.

• China lacks a legal framework for regulating political financing due to the fact that political party expenditures are “covered by the central government” and businesses typically do not influence politics through donations, but rather through personal contacts.

• Yemen earned very weak scores across the board, from civil society and government accountability to business regulation and the rule of law. The country’s executive, judicial, and legislative accountability mechanisms are among the worst assessed in 2008.

As citizens of these nations turn to their governments for help in the current global economic downturn, our concern is only heightened. Without the proper mechanisms to keep tabs on the flow of money through government, there is a high likelihood that funds will go missing.

We have already seen stimulus plans in some of the countries on the Watch List. China enacted a 600 billion dollar stimulus program in December 2008. That same month, the Montenegro government bailed out a national bank in trouble. While no action has been seen yet in Morocco, the government has announced its commitment to assist its weakening auto and clothing sectors.

In addition to these internally driven bailout programs, the IMF has approved or re-extended loans for Georgia and Serbia. A fellow member of the Grand Corruption Watch List, Belarus may be accepting bailout loans from Russia in the near future.

Whether the Watch List governments are receiving outside loans or creating their own stimulus plans, the increase in government funding relative to the lack of financial safeguards sends up big, bright red flags.

It is important to note that Global Integrity is not presuming or guaranteeing that grand corruption scandals will occur in these nations. Rather, we are highlighting the risk that comes when governments do not have the mechanisms or laws in place to prevent or detect the diversion of funds. Especially in this time of global financial crisis, there is a high likelihood that large government spending projects in these 13 Watch List nations could easily be mismanaged.