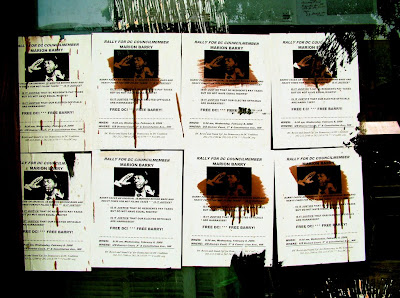 Considering the national attention recently given to D.C. Councilmember Marion Barry, we decided that it is high time we reported on some of the corruption in our “backyard,” so to speak. In a pattern we’ve seen worldwide, the trouble isn’t (just) the irrepressible Mr. Barry, but stems from the District’s poor controls on conflicts-of-interest and money in politics.

Marion Barry is a familiar face on the D.C. political circuit despite his less than perfect record; he’s satirically known as Washington’s Mayor-for-Life. Barry did serve as D.C.’s long-standing second mayor (1977-1991) only stepping out of office after being convicted for drug possession. After serving his jail sentence, Barry was back in the political game representing one of the District’s eight wards on the City Council and serving another term as D.C. mayor from 1995-99. Today, he continues to serve in government as a Ward 8 councilmember. Barry’s 1991 arrest for drug possession is widely-known in the U.S. but other charges for tax evasion, stalking and (more) drug possession have added to the councilman’s shady reputation.

In the past month, Barry has been thrown back in the spotlight. He as arrested on July 4th for stalking an ex-girlfriend. It was also recently revealed that Barry’s girlfriend had been placed on the payroll of the councilman’s office. On top of this, the Attorney General’s office has opened a case on Barry over suspicions that he misappropriated government funding by funneling it through “store-front” (i.e. phony) non-profits. D.C. city council representatives are allotted a certain amount of government funding to distribute to local community development groups. In Ward 8, six non-profits who were endowed with this funding have come under suspicion after one of Barry’s former employees revealed the network of conflicts of interest between these community groups and the councilman’s office. The corresponding timing between each group’s inception, their leadership (hand-picked by Barry) and the doling out of funding, all point to cronyism at best and graft at worst.

In an article from last week, the Washington City Paper claimed that “virtually every person who has drawn a significant paycheck from the six groups was either a paid staffer or volunteer with Barry’s reelection campaign last year.” While Barry’s appointees all passed through an official approval process, the often snarky City Paper reporters likened this process to “honest graft.”

Drawing on the City Paper’s research, regulations for the distribution of earmarked funding were nonexistent until 2008. Wow! And even now, the year-old accountability framework remains incomplete. The council approved regulations to limit the amount of funding that each community group can receive, but the documentation requirements placed on these groups remain weak. As stated in law, neighborhood groups that are not yet officially incorporated as non-profits can find other recognized non-profits to act as sponsors. These benefactors hold onto the government funding until the paperwork goes through.

By encouraging the government to quickly disperse the funding, even if it is placed in temporary hands, this regulation adopts an underlying assumption that the money is better off out the government’s reserve. But does this system actually ensure that money is out of politicians’ hands? Is it right to assume that non-profits are adequate safe-havens for the funding? In the case of Barry, it doesn’t seem so…

There is clearly an entangled web of allegiance between Barry and his earmarked non-profit groups. The groups were hand-picked and led through the incorporation process by Barry and his staff. Their leaders are Barry’s friends. The council-member didn’t only set up his campaign workers; he also placed his rehab sponsor in a top position.

Despite all this, Barry may not be doing anything illegal, at least not according to the rules set forth in 2008. Barry defended his actions saying, “what’s the big deal? There’s nothing illegal about me or any other council-member supporting an organization that they have established if that organization is doing good work and meets the requirements.”

While most of the media coverage of this controversy has chosen to focus the story on Barry and his notorious persona, the real concern lies with the system itself. There won’t be much surprise in D.C. if the Attorney General’s investigation reveals that these six nonprofits are a Barry-led scheme to funnel money into his personal accounts or the accounts of his friends. However, if the city council took this moment to reform the earmarked funding regulations to protection against localized corruption, now that would be newsworthy!