Openness is Not Enough: Evidence of Kickbacks Sat Unnoticed for a Decade

Following the first real elections in Estonia’s history, the new ruling party donated stacks of documents to the publicly accessible National Archives. It was a gesture of revolutionary goodwill and transparency that would come to haunt the Isamaa party. But the documents remained unread for more than a decade until a Tallinn-based journalist, Tarmo Vahter, used Isamaa’s complete bank records from 1993 to show that party leaders directly solicited and accepted payments from soon-to-be privatized companies. 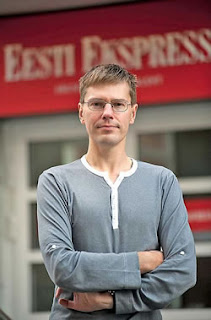 Tarmo says the documents did the story-telling: “The bare facts were that Isamaa had lied to the Estonian people during their first term. They promised the nation fair play, but cheated… When my story was published in 2006 it had only one [outcome]. The political parties finished the donations of documents to the National Archives.”

But Tarmo’s story may have had more impact than he admits. The presence of a strong network of investigative journalists like Tarmo is increasingly being seen as threatening to the Estonian government, and officials are responding accordingly. Late last year, the Minister of Justice began a push for legislation that would jail journalists for up to one year for refusing to identify confidential sources. Then in March 2010, in a terrific display of solidarity, six Estonian daily papers protested this pending law by printing only blank pages. The message was clear: no news is better than government-controlled news.

In the midst of this protest, I interviewed Tarmo on the stories he has dug out of the National Archives and the future of independent journalism in Estonia.

Norah Mallaney: Tell me more about the 1993 case you broke on Isamaa’s use of state-owned enterprise funding for its political organizing and campaigning. What prompted you to look into these particular campaign finance records?

Tarmo Vahter: During the last years, I have been working busily in The National Archives of Estonia. Mostly people think that in the archives you can only find old and very old documents: from the Soviet time, from the Nazi time, from the twenty years of the first Republic of Estonia 1918-1940 and so on. I am more interested about the newest history of Estonia, since the reconstruction of the independence in 1991. It´s amazing what has happened in my country during last 20 years. Almost everything in politics and economic life has totally changed. In 1991 we had typical Soviet state-owned economy, now we have very liberal capitalism. We believe that we know how Estonia became a capitalist country, but there are many secrets, some of them very surprising.

In 2006 I suddenly discovered that some Estonian political parties had donated a lot of old documents to the National Archives. All of the documents were properly regulated and every researcher had permission to read them. When I got the first piece of paper into my hands, the documents had been in the archives already some years. It´s hard to believe, but I was the first to read them. Nobody had had any interest to read them!

The biggest treasure waited in the archives of Isamaa (Pro Patria). Isamaa was a conservative political party which dominated the Estonian foreign and home policy 1992-1994. The chairman of Isamaa was a young politician Mart Laar; in 1992 he became the prime minister of Estonia. His government did very big liberal reforms and changed the whole Estonian society. One of their main promises was to liberate Estonians from Soviet past and Soviet-style corruption.

When I read the original Isamaa documents, I discovered the other side of the story. Almost immediately after the successful elections in 1992 some very influential members of Isamaa started to collect secret money from the directors of not-yet-privatisized companies.

The authenticity of the documents was beyond a doubt. Isamaa had donated for the National Archives hundreds of pages of documents. There was even the whole book-keeping from the year 1993, and the original bank transfers. There were even the very expensive restaurant bills!

The bare facts were that Isamaa had lied to the Estonian people during their first term. They promised the nation fair play, but cheated. Estonian own currency (the kroon) was created in 1992. In the beginning of the nineties most of the Estonians lived relatively badly. The secret donations from the state-owned-companies were very big and therefore very important for Isamaa. How important they were, was easy to discover. In the archives were even the copies of the letters of Ivo Rull, Secretary-General of Isamaa. Mr Rull wrote personally to the directors of biggest state-owned companies and directly asked for the donations.

It is important to add that until April 1994 it was not forbidden to the state-owned-companies to sponsor political parties. So no crimes were committed. But it was immoral, of course.

I remember, that there were some rumors in nineties about Isamaa´s secret money. But nobody had the evidence. I believe that if the same documents were published in 1993 or 1994, it would have ruined the reputation of Isamaa and his leaders.

When my story was published in 2006 it had only one, but clear aftermath. The political parties finished the donations of documents to the National Archives. 🙂

NM: How easy is it for journalists to access information related to political campaign spending in Estonia today?

TV: It´s relatively easy for journalists to access information about political campaign spending in Estonia. The political parties must publish the names of the sponsors quarterly. It can be worthwhile to read these lists carefully. Some years ago one of my colleagues discovered, that some very poor people had donated very big money for one political party. Of course, the poor people were used as figureheads.

NM: What stories have you been working on lately?

TV: In 2009 I published a book about the family of late Estonian president Lennart Meri. Again, I had luck and found from the National Archives unknown documents about the presidents father Georg and grandfather Otto. It came out that already Otto was a politician. He was elected to the City Council of Tallinn in 1904. It was the first time, when Estonians took the power in Tallinn after 700 years of German administration. I really enjoyed the writing of Meri´s family story, how the grandfather, son and nephew made the history during 100 years. It´s unique story in Estonia.

NM: Last month’s front-page protest by multiple national newspapers and the Minister of Justice’s threat to legally force journalists to reveal sources seem to suggest that the media in Estonia is at a watershed moment. Where do you see print journalism in Estonia trending in the near future?

TV: It´s very hard to forecast what the Estonian parliament will do with the proposed law on source protection. There have been plenty debates. Many politicians believe that there is no reason to have a law, which will ignore the principles of the European Court of Human Rights. But Rein Lang, the Minister of Justice, believes that it must be possible to send the journalist to prison for one year, if a journalist will not reveal his or her secret sources.