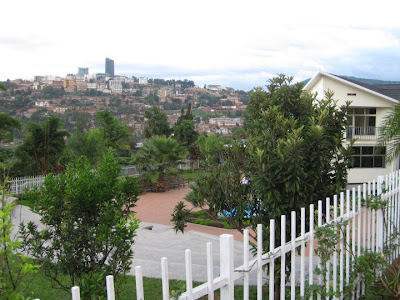 On May 24 and 25 2010, Global Integrity co-hosted a Dialogue workshop in Kigali, Rwanda in conjunction with the Rwanda Governance Advisory Council (RGAC), a quasi-governmental think tank and research center. This two-day workshop was part of the Global Integrity Dialogues series, in-country events where Global Integrity convenes local stakeholders (including government officials, civil society activists, journalists and academics) with its local research team to discuss the results of the latest Global Integrity Report for the country.

Our discussion in Rwanda was one of the most robust Dialogue events that Global Integrity has ever organized, both in terms of the number of participants and the substance of the discussion. Rwanda is a country with the potential to be a leader in the region on good governance, although significant challenges remain.

In Rwanda, we were pleased to have the support of such a strong local partner in RGAC to assist with the design and execution of the workshop. While part of RGAC’s mission is to enhance Rwanda’s image internationally with governance data generators such as Global Integrity, they played the role of honest broker in helping Global Integrity organize the event. Most importantly, RGAC helped us convene more than 70 participants from a variety of backgrounds and sectors. Government oversight institutions (such as the Ombudsman and Auditor General’s offices), Senators and MPs, government ministers, faith-based organizations, international development partners, and media houses were all in attendance. Rwanda’s Minister of Local Government (himself a former Minister of Finance), moderated the first morning’s panels, helping to generate media coverage of the workshop.

Nathaniel Heller and Norah Mallaney of Global Integrity presented the Global Integrity Report methodology and highlights from the Global Integrity Report: 2009 Rwanda. Due to the sophistication of the audience, we were able to engage in a robust debate around the Rwanda scorecard and data. Participants agreed with our overall findings for the country, although there was pushback around Global Integrity’s findings for political financing safeguards in the country, feedback which we promised to take back to our local research team and issue corrections if necessary. Another category of indicators that drew robust debate was the Rwandan national budget process. Global Integrity data for the country tracks with other international NGO assessments in showing poor public input into the national budget formulation process (there are no public budget hearings, for instance). In response, several government participants pointed to the robust internal government budgeting process as evidence of “transparency” around the budget process, but in some sense this was missing the forest for the trees. 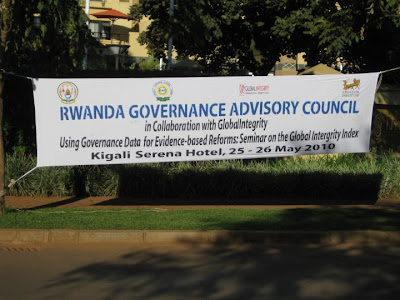 For the afternoon session of the first day, participants were broken up into three groups and given the mandate of presenting what they collectively identified as the most pressing and achievable governance reforms in Rwanda, whether based on the Global Integrity data or otherwise. All three groups focused on the passage of the country’s draft freedom of information law, currently tabled in parliament, as an important immediate step towards increasing government transparency. The Minister for Local Government committed, on the record, to supporting passage of the draft FOI law in the near future. We hope this will occur this spring or summer.

The discussion of sequencing anti-corruption reforms in Rwanda was continued the next morning in a smaller group session designed to dig into the details of “what comes next” for Rwanda. The need to strengthen Rwandan civil society was raised by several participants; representatives from the U.S.-government funded Millennium Challenge Corporation’s local office noted that the MCC has just launched a major three-year effort (an MCC “threshold program”) to strengthen local civil society capacity. Other recommendations raised included requiring that political party expenditure reports be made publicly accessible and that justice sector reforms continue to reflect and integrate more traditional and local justice institutions, such as local mediators and the “gacaca” courts that have proven effective in processing genocide perpetrators.