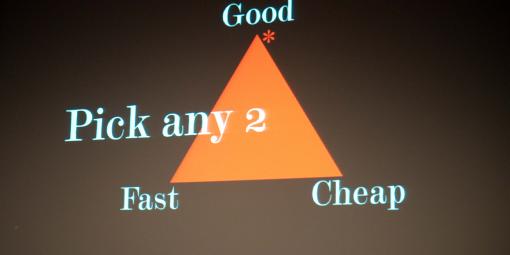 The Associated Press just published a fascinating investigation into the use of secret, non-public email addresses by senior US government officials. While the AP has yet to uncover a smoking gun suggesting that the alternate emails were being used to deliberately evade disclosure of information under US Freedom of Information laws, the controversy raises important questions for the government transparency and open data communities: how do we balance the three competing and potentially mutually exclusive needs of transparency, accountability, and privacy?

As the AP reports, most senior US officials identified as maintaining a second (or third) non-public government-run email address claim they used the alternate emails as a way to communicate with staff internally while avoiding having their inboxes completely crushed by public spam. This is frankly a reasonable idea. The practice of government officials using private, non-official email addresses to communicate about government business is also prevalent and unavoidable. When working at the US Department of State (from 2002 – 2005) I remember seeing emails from then-Secretary of State Colin Powell’s personal AOL address. It was simply easier for him to send a quick message back to Washington while traveling around the world using AOL compared to the department’s then antiquated, highly-secure and highly inaccessible classified email system.

Where the AP rightly chafes at these practices is that they potentially undermine Freedom of Information requests, especially in departments that aren’t keeping a ledger of the alternate email accounts being used by senior officials. Here the AP is absolutely right to be worried, and departments should address this immediately.

The larger issues at play should resonate with transparency and open data advocates: how do we balance transparency and accountability agendas (e.g. FOIA and open data) with legitimate privacy concerns? Do we really want our cabinet officials waking up to 3,300 messages in their inbox because we insist they can use only one very publicly advertised email address? I don’t have good answers to that but I do think it’s a question that needs to be raised more seriously within the community.

In some sense you could frame the challenge as something akin to the famous Engineering Triangle problem: you can build something that is fast, cheap, or good but only with two of those three characteristics. There are no fast, cheap and good products. Perhaps that’s the reality we may need to address in the era of open data, participatory policy making, and Google Glass: you can have transparency, accountability, and privacy but never all three at the same time.

I know that some colleagues, such as Martin Tisne over at the Omidyar Network, are increasingly worried about the lack of attention to privacy concerns being paid by the government transparency and accountability community. I agree it’s an important moment to start a conversation. We need not just open data evangelists and privacy zealots in the room but also Google. It will be a fascinating and potentially contentious debate but one that needs to start now.

In the meantime, send me any non-public, secret email addresses you might use so that we don’t forget to invite you.