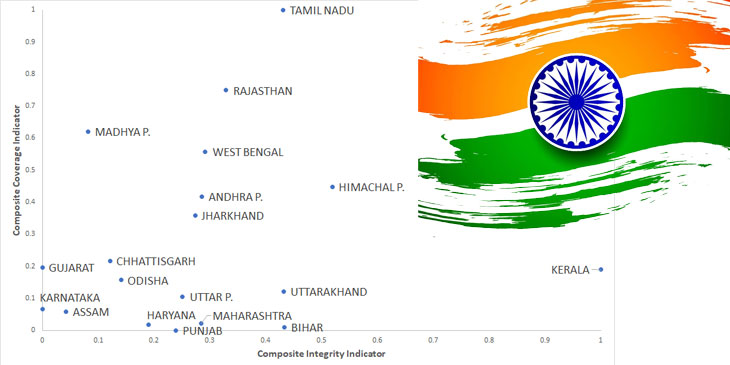 Understanding where corruption is high and why is a difficult task mainly because of the difficulties in measuring corruption. Given the well-documented problems with perceptions of corruption, recent literature has focused on objective measures of corruption. Focusing on the delivery of public services, a reliable measure could be the irregularities detected by top-down audits or social audits detected in such delivery. Unfortunately, as discovered by other scholars in the GI-ACE research programme (David-Barret and Fazekas, 2020), data on irregularities in delivery (“leakages”) or in procurement practices are notoriously hard to obtain, nor is it clear that data are correctly coded. However, digitization at all levels of government in India is proceeding rapidly so that perhaps there will be a rich source on audit findings in a few years. (Read more: India’s federal procurement data infrastructure.)

In the meantime, we started our work on the premise that corruption is lower when the measures of delivery are good.1 There is a mass of publicly available data on the delivery of the two main programmes we are looking at: the NREGA (Mahatma Gandhi National Rural Employment Gurantee Act – a large workfare programme) and PMGSY (Pradhan Mantri Gram Sadak Yojana – a large rural roads connectivity programme). As a first step, we use this publicly available data to rank various states in India on how good their delivery was over the period from 2011-12 to 2018-19. The idea behind such comparisons is to highlight the determinants of good public service delivery, which is possibly linked to higher accountability. In this blog, I will discuss the first of these programmes: NREGA.

The NREGA mandates the provision of 100 days of manual work on publicly funded projects to rural households in India. The Act envisions a rights-based approach: rural adults can demand work at a mandated minimum wage. The programme was initially implemented in the country’s poorest 200 districts in February 2006, with 130 additional districts added in the next stage (2007), and national coverage thereafter (2008). As of 2011-12, the Act provided employment to almost 40 million households at an annual expenditure of more than $8 billion, making it one of the most ambitious poverty-alleviation programmes in India to date.

While the primary objective of the programme is social protection through the provision of employment, it also aims to create durable assets for the community, as a whole, and for socio-economically disadvantaged individuals (e.g., irrigation canals, ponds for water conservation, development of land for cultivation by socially disadvantaged groups, and other rural infrastructure). In order to fund the programme, the central government disburses funds as an advance, which is then backed up by receipts from the local authority. Implementation is carried out by grassroots institutions at the directly elected village, sub-district, and district levels under India’s decentralized system of governance.

It is, however, difficult for the central government to get a full accounting of what has been spent and on what. There are a number of layers through which the money passes, leading to substantial “leakages” before reaching the intended beneficiaries (Banerjee, et al, 2019; Renikka and Svensson, 2004). Although official estimates of such leakages are missing, a survey in 2007-08 of 3,000 households in two large states of India showed estimates of corruption of the order of 75-80 percent (Neihaus and Sukhtankar, 2013).

These indicator variables are aggregated at the state level. Since it is pointless to compare these variables in absolute terms without addressing the huge heterogeneity across states in demand for NREGA employment, we control for the demand for work with the proportion of rural adult poor who are in principle the main users of the programme. Finally, we also carry out the analysis for the restricted sample of those workers who belong to the disadvantaged castes as prescribed by the constitution.

Looking at the average picture over the eight years of our analysis, our main results are as follows:

Significantly, Bihar is among the worst performing states on coverage but performs well on intensity, while the situation is the opposite with Madhya Pradesh. On average, however, the correlation coefficient is high, with states that perform well on one indicator also performing well on the other indicator. Restricting the analysis to disadvantaged populations, the average performance is much better, showing that all states are targeting delivery to these groups. 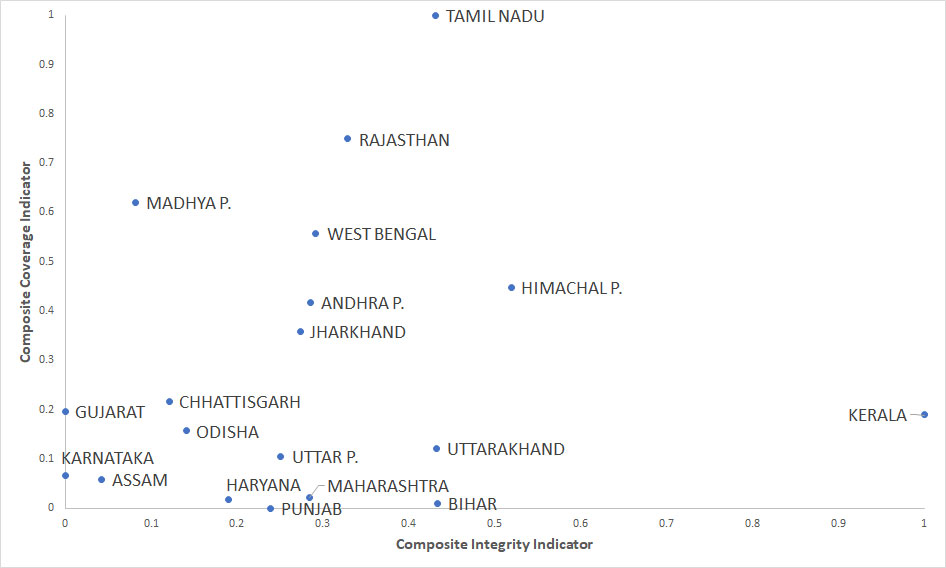 Moving to a dynamic analysis, there are no huge changes in the state rankings over the eight years of the study. However, in intensity, West Bengal saw a spectacular improvement in its ranking from among the bottom ten in the first three years to the top five toward the end.

More interesting is the question of what can be deduced from these broad patterns. States that are highly ranked happen to be those that are known to have high state capacity, considered to have three main dimensions:

Of the three dimensions, extractive capacity is negatively correlated with state performance, likely due to the fact that it is precisely the poorer (fiscal capacity) states who get the largest share of the NREGA allocation. Administrative and coercive capacity – measured by the number of police per capita, the rural literacy rate, and rural infant mortality rates – is more important to the success of NREGA, driven by the intensity variables.

Our conclusions are very preliminary and should be interpreted more as suggestive evidence, being based on a very small sample of 19 states large enough to merit analysis. We plan to extend this work to a more disaggregated analysis, which may provide more insight.

[1] Note however an important caveat: scholars have used differences between households’ level surveys and official statistics as a measure of leakages, most recently Imbert and Papp (2011). Official statistics may therefore not give a fully accurate picture.