For his entry, Jorge Meruvia sent us a portion of his thesis– a paper on the differences in the anti-corruption regimes of Chile, Brazil and Mexico. In Jorge’s words:

In my thesis, I look at the diverse anti-corruption institutions in Chile, Brazil and Mexico, considering their effectiveness, weaknesses and strengths in prevention, education but mainly prosecution. The qualitative analysis and quantitative data provided by Global Integrity provides an invaluable tool for academic research.

Jorge not only used Global Integrity data for a narrative analysis, he also used the results of the Global Integrity Report to produce his own graphics. Jorge used the simple technology of Excel to create a visual display placing the relevant data for his three target countries side by side and clearly depicting his central argument. You can read a portion of his still-unfinished thesis and see one of his original charts below.

Anticorrruption Institutions in Chile, Brazil and Mexico– an MA thesis in Public Administration

[…] Another source of information providing valuable insights about the effectiveness of anti-corruption institutions around the world is Global Integrity. In their annual reports, which are based on both data gathering and informed on-the –ground reporting, they score countries according to six categories: 1) civil society, public information and media; 2) elections; 3) government accountability; 4) administration and civil service; 5) oversight and regulation; and 6) anticorruption and rule of law. It is in the last category that we will stop to take a look at Global Integrity’s evaluation of performance/effectiveness of anti-corruption institutions in Brazil, Chile and Mexico. 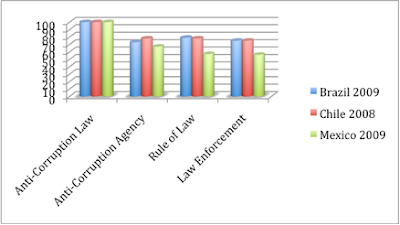 Noting that the Global Integrity reports are composed of “in law” indicators and “in practice indicators,” it is pertinent to point out from the table above that although all three countries got relatively good or acceptable scores in the anticorruption and rule of law category as a whole, this positive image erodes when a differentiation is made between the existence of laws and their implementation. Particularly concerning the Anti-corruption agency -as this is allegedly the institution (or institutions) leading the country’s strategy against corruption- the following disaggregated data from Global Integrity will result revealing and even alarming in the case of Mexico, whose anti-corruption agency’s effectiveness evaluation (indicator 2) falls far below the “Very weak” assessment.

While Brazil has prompted in recent years a notorious increase in the anti-corruption efforts in the Federal level, and Chile has kept a leading performance in comparison to other countries in the Latin American region, Mexico has not yet taken a clear hard-line stand against corruption despite have hosted the United Nations Convention against Corruption in 2003 in Merida. Particularly there is a lot of potential for improving the effectiveness of the anticorruption agencies, namely the Ministry of the Public Function (Secretaría de la Función Pública) and the Inter-Ministerial Commission for Transparency and the Fights against Corruption (Comisión Intersecretarial de Transparencia y Combate a la Corrupción). If these bodies remain in place in the second half or the current administration, there is a need to de facto enhance their preventive functions but more importantly to give greater weight on the investigation and effective prosecution of corruption allegations. […]

Chart created with data from globalintegrity.com. Evaluation from “Very Strong” to “Very Weak” are asigned by the Global Integrity team after applying the methodology described in http://report.www.globalintegrity.org/methodology/whitepaper.cfm.

N.B. Note that the latest available quantitative assessment from Chile corresponds to 2008. Although variations may occur in a one-year lapsus, the general photo is likely to persist, particularly considering there was no regime-change in Chile from 2008 to 2009.